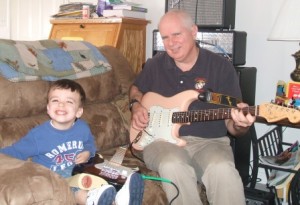 I am happy to have a guest post from Larry O’Donnell, my brother-in-law. A retired federal agent — and my go-to resource for writing about weaponry and battle tactics (like how to rescue hostages atop a Mexican pyramid) — Larry has provided many a humorous guest post over the years I’ve been running this blog … and a few sobering ones as well.

Today’s post is in honor of Veteran’s Day, this Wednesday, November 11.

Sometimes, I think of November 7 as I think of my birthday.  It is an important day on my calendar.  And because it’s four days from Veteran’s Day, I am a bit more thoughtful of the holiday. For those who don’t know me, I have been living on borrowed time since November 7, 2003.  I beg the indulgence of those who know this story on behalf of those who don’t.  There’s something I will reveal for the first time.

I was in Mosul, Iraq conducting “other duties, as assigned” for Homeland Security.  I had completed training the fledgling Iraqi border services in northern Iraq.  At 0800 that morning, I was sitting in a UH-60 helicopter and was strapping in for a two hour flight to Baghdad, via Tikrit. It was a routine mission, a flight of two Blackhawks was carrying me, another agent, the Judge Advocate General of the Army, and his entourage.  The Iraqi insurrection was underway in earnest, having downed two US helicopters in the week preceding, and hundreds of IED attacks on Iraqi and American military and security forces.

The General exercised his prerogative to “bump” manifested passengers and had us removed from the aircraft.  There was plenty of room but he had two of his staff moved over to ride in my helicopter and the crew chief apologetically said they would return for us around noon.

I was peeved by the delay but had to grin and bear it.  Mumbling uncharitable things about lawyers, I grabbed my gear and walked off.  Hours later I learned that “my” helicopter had been shot down, killing everyone on board.

On the whim of the Army JAG, I was spared and two of his staff were not.

The bright spot of this event was that I had a son about three years later- a true gift from God.  Deb and I believe that’s why I survived.

Twelve years later, I still often think of that day and, periodically, I have a dilly of a nightmare about it.  Randomly, I dream of that crash.  I feel the missile’s impact and a sharp wrenching of the helicopter.  My legs are on fire. So is everyone around me.  Sometimes, I feel the seat collapse as we hit the ground and I can’t get because the seatbelt is melted to me.

Luckily, I get to wake up and it’s over.  I suspect my wife knows when the dream comes but I haven’t told her, at least not for years.  She thinks the thrashing is Parkinsons, but most times it’s the dream.  I have survivor’s guilt.  Clinically, it’s probably a dash of PTSD, but it is isolated and I am generally doing well.

I relate this story for a reason.  I am not a hero.  Any Marine will tell you the real heroes didn’t come back or came back badly wounded, sometimes horribly.  It’s important to remember our Veterans and the baggage they carry from the war.  Thank them for their service and mean it.  Their dreams might be far worse than mine.