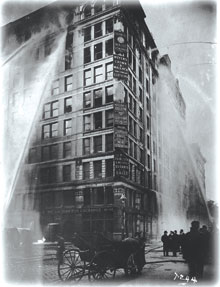 First, I’d like to extend thanks to Jack Dixon for pointing out this anniversary. It’s a sad thing to remember today, but the consequences of forgetting are too terrible to let it pass unmentioned.

On March 25, 1911, 146 workers lost their lives in the Triangle Shirtwaist Factory Fire in New York City. Most of them were Italian and Jewish immigrant girls between the ages of sixteen and twenty-three.

The fire may have been started by a cigarette thrown into the trash, or it may have started by the engines running the sewing machines. Whatever the cause, there was insufficient means to alert the workers to the danger. The owners escaped the building, but the workers on the ninth floor were locked in – access to stairwells and exits blocked to prevent employees from stealing from the company. The foreman who held the keys fled the building by another exit, leaving his charges to die.

Some people tried to save the girls. Two elevator operators, Joseph Zito and Gaspar Mortillalo, ran the elevators until they ceased functioning. The factory manager, Samuel Bernstein, re-entered the burning building again and again to lead workers out. However, there were too many people trapped, and too few ways to get out. There was only a single fire escape, poorly anchored and not maintained. It collapsed during the disaster, spilling people to the pavement below.

And then, there were the girls who jumped from the ninth floor — scores of them – while onlookers in the street watched, helpless to save them. “I looked up at the burning building and saw girl after girl appear at the reddened windows, pause for a terrified moment, and then leap … This went on for what seemed a ghastly eternity.”

Even though none of us were alive to see this happen, we know what it looks like. We saw it on September 11. We know.

WHY am I ruining your Friday with this story? Because, as Jack Dixon pointed out to me earlier this week, it apparently takes America only 100 years to forget.

Those factory workers were unrepresented. They had no one to fight for their rights, to protect their safety in their place of employment. They died because no one cared about them. The owners of the Triangle Shirtwaist Company were eventually made to pay a $20 fine for allowing the exit doors to be locked.

One hundred years later, in 2011, state legislatures across the country have stripped public workers of their right to collective bargaining. In Maine, a governor has ordered a mural depicting the history of the labor movement removed from a public building, because it is “offensive to business owners.” Somehow, America – the land of the free and the brave – has become a country where the memory of those who fought for the rights of workers is “offensive.” How did that happen?

I am truly sorry to sadden you on a TGIF day.

But for just one moment … can we spare a thought for the girls who died because they didn’t have what we take for granted? The Triangle Shirtwaist Fire is one of the reasons we have labor unions today.