Two news articles caught my interest last week. The first was about the discovery of a pair of lost cities in the Honduras jungle. The other was about ISIS bulldozing and smashing artifacts in the ancient Assyrian city of Nimrud. 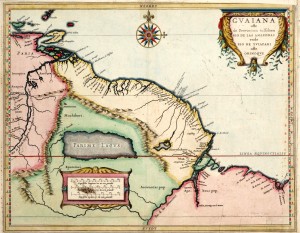 In the year 1541, Spanish explorer Francisco Orellana undertook a journey down the Amazon River with a Dominican friar named Gaspar de Carvajal. Carvajal chronicled their expedition, reporting numerous advanced civilizations in the jungle all along the river. The banks of the Amazon were “thickly populated,” according to Carvajal. There were wide roads and marketplaces where one could buy bread, wine with a taste like beer, all manner of fruits and vegetables, and plates made of the finest porcelain he had ever seen. The friar wrote that the cities “glistened in white” against a backdrop of terraced farmland.

By the Victorian age of exploration, Carvajal’s account was written off as a fanciful fabrication. There were no cities in the Amazonian jungle and never had been. In fact, the jungle environment was incapable of sustaining any kind of population and certainly could never be farmed. History was re-written to discount any Amazonian civilizations. Female warriors (who supposedly put an arrow in Carvajal) and the Lost City of Z (or El Dorado, if you prefer) were reduced to legends and myths.

Then, in 2010, satellite technology discovered earthworks in the Amazon basin near the Brazil/Bolivian border. And now ruins of two ancient cities have been found by archeaologists in Honduras. (The latter would not have been along the path explored by Orellana and Carvajal, but it does support their claim that jungle-based cities existed.)

What does it take to erase history? Religious extremists with bulldozers and sledgehammers? Conquistadors? Aggressive jungle plant growth? The sacking of an ancient library? How about ordering specially-written revisionist history texts for school children?

What have we irretrievably lost? What might we lose in the future? They say anything you put on the internet will be around forever, but that pre-supposes access to (and the existence of) technology that can read electronic information. You might laugh at the idea that the human race could lose the technology we have. But there are blocks of stone in the ruins of ancient cities high in the Andes mountains that were carved with laser-like precision, structures that look like runways, and earthworks shaped like pictures that can only be viewed from the air.

What if people like that have already re-written earth’s history? What if it can happen again?