Sometimes the Hero Doesn’t Get the Girl 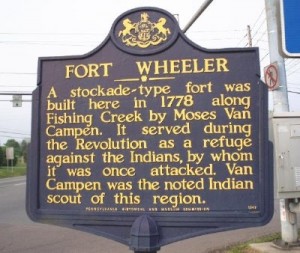 Before beginning my manuscript The Caged Graves last summer, I researched the history of Pennsylvania’s mountainous Columbia County in the 1860’s. But my plotline incorporated a lost Revolutionary War treasure, so I also researched events of the 1770’s, when this county was under threat from British forces and their Indian allies. These events were only peripherally related to my manuscript, but I discovered many tantalizing little tidbits I wished I could use.

Take Moses VanCampen. He was nineteen years old in 1776 when he wanted to sign up with a Columbia County regiment joining Washington’s army near Boston. But some older men talked Moses into staying at home as part of the local militia. Young Moses was a crack shot, as well as a level-headed young man – somebody they could count on to defend the Columbia County civilians. He agreed to stay and take on the job.

Moses was ordered to build a fort near Fishing Creek to provide shelter for the locals in case of an attack. Moses chose the home of Isaiah Wheeler as the location for his fort and directed the construction of a stockade fence around it, large enough to accommodate all the inhabitants of the area. His choice of property was influenced by personal reasons: he was courting Wheeler’s daughter, Ann, at the time.

So, Moses built a fort around the home of his sweetheart, and even before completion, it was put to the test. Indian raiders attacked and burned neighboring homes, but the settlers themselves fled to the safety of the half-completed Fort Wheeler, which withstood the attack. For the next year, Moses VanCampen made Fort Wheeler his headquarters as he ably defended the region with his company of sharp-shooters. In fact, Fort Wheeler was one of only two local forts to survive the war.

There’s a story here. A very human story amidst all the history. I kept imagining Moses living at that fort, perhaps even quartering in the Wheeler house, fighting off the Indians and the British while simultaneously losing his girl to the arms of his best friend. Moses and Ann and Joseph had no place in my story, The Caged Graves – they lived 100 years earlier and on the other side of the county – but I couldn’t stop thinking about them.

Why didn’t the hero win the girl? Was Joseph more handsome — more charming? Was Ann fickle? Or did Moses have some flaw that drove her away?

Maybe I’ll write about them some other time – or maybe they’ll be just a tantalizing tidbit of history that will always leave me wondering.