The Surprising History Behind Labor Day 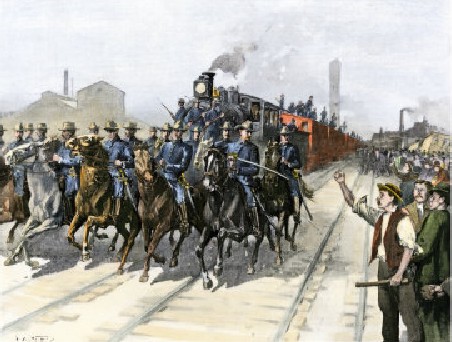 The end of summer, cook-outs, and retail sales – that’s what Labor Day means to us.  Although most Americans make a point of enjoying this September holiday, very few of them know it began over a century ago with a violent fight for the rights of laborers and a President’s campaign for re-election.

The first Labor Day was celebrated in 1882 in New York City as a workingman’s holiday and a way to smooth over relations between industry and the laboring class who were at that time unionizing to fight for decent wages and working conditions.  The idea caught on and spread to other cities, even becoming a state holiday in several states across the U.S.  However, it didn’t become a national holiday until 1894, following the Pullman Strike.

George Pullman was the inventor of the Pullman car (a luxury sleeper car) and the vestibuled train (where cars were joined together so passengers could pass from one to the other without stepping outside).  Pullman built a company town outside Chicago, where he “shielded” his workers from labor unrest by insulating them from the outside world. Independent newspapers, public speeches, and town meetings were prohibited; homes were routinely inspected for cleanliness. Every aspect of the workers’ lives was directed by the company. An editorial in Harpers Weekly remarked that the power of Otto Von Bismarck, unifier of Germany, was “utterly insignificant when compared to the ruling authority of the Pullman Palace Car Company.”

When an economic depression in 1894 led to decreased revenues, Pullman slashed his workers’ wages, but continued to dock the same amount for rent from their paychecks.  Prices in his company run stores remained the same. The workers elected a delegation to protest, but Pullman refused to speak to them.  With no other recourse, employees organized a strike, and when the American Railway Union threw their support behind the strikers, their actions crippled railroad transportation across the entire country.

President Cleveland declared the strike illegal under the grounds that it interfered with delivery of U.S. Mail and sent 12,000 U.S. Army troops to break it up.  The resulting violence (13 deaths and over 50 wounded) caused a wave of disapproval for Cleveland, who was accused by Illinois Governor Altgeld of putting the U.S. government to work for wealthy industrialists.

Since Cleveland was seeking re-election, he scrambled to redeem his reputation among the laboring class by moving legislation for a National Labor Day Holiday through Congress that same year.  Nevertheless, Cleveland was not re-elected.

As for Pullman, he remained so unpopular that when he died in 1897, he was buried in a lead-lined coffin inside a vault reinforced with concrete and steel to prevent desecration of his body.

I don’t like to get too preachy on this blog, but I think every American should know their history.

Enjoy your upcoming Labor Day, everyone, but KNOW why we have one.