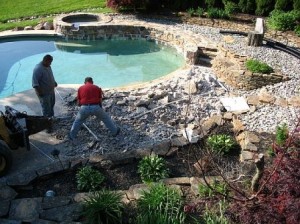 Some people ought not be allowed into home improvement stores. Alarms should go off when these people cross the threshold, and security guards should escort them from the premises.

The original owners of our home were Do-It-Yourself-ers. They bought the house partly finished, and completed it themselves, with the help of a lot of friends, cut-rate materials, and (we suspect) a lot of beer.

They built the deck, but didn’t ground the posts in concrete, so eventually they began to rot away. Consequently, we had to have the deck torn down and rebuilt.

We don’t know who they got to pour concrete for the pool deck, but whoever it was didn’t have the formula right. The concrete began to crumble, and we had to pay people to jack hammer it up and replace it. (The jack hammers were overkill. The construction crew kept picking up chunks and crumbling it in their hands, laughing and making comments like: “Look at me! I’m Superman!”)

They finished the kitchen, too – with cheap cabinets, a tile countertop they laid themselves – YIKES – and Pepto-Bismol-pink flowered tile floor that only an old lady could love. They felt that grout could fill in any mistakes they made with the tiling, and they must have bought buckets of it!

Plus, they built their own island. It’s heptagonal. How many of you have a 7-sided island in your kitchen? I wonder if they thought it was lucky.

We can’t afford to replace the cabinets, so we’re painting the ones we have. We started a steampunk-sort of theme when we installed counterweight lights, so I’m continuing the idea by putting a different and unusual knob on every single cabinet. 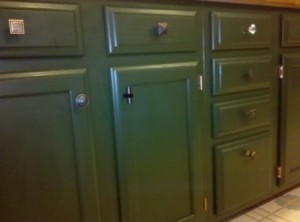 The picture above is a peek at our newly painted, multi-knobbed cabinetry. Here’s a few more of the knobs we’ve purchased! My daughters (unsurprisingly) are fond of the gargoyle. 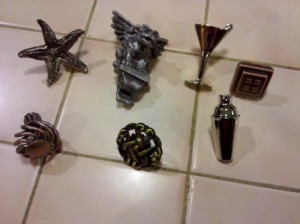 I’m also considering this clock. (Okay, I already bought it.) 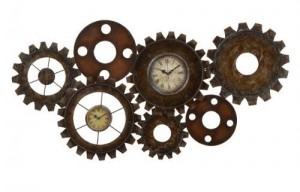 I plan on staying in this house for a good long time, so hopefully nobody can come along behind me and call me a Decorating Vandal.