A Second Chance at Sight, Living a Dream, and Publication

A little over a year ago, I brought you the story of February Grace, who overcame a battle with blindness AND completed her first novel, GODSPEED. Now, Bru’s novel has been picked up by Booktrope and was recently re-released with a new cover — and her second novel is currently in the editorial revision process.

Today, I’ve got a revised and revamped version of my interview with February Grace, telling the story of GODSPEED, her romance novel infused with steampunk elements, and her path to a publishing contract.

1. What was the inspiration behind this story?
I was at home recovering from surgery (I had fifteen surgeries between 2009 and 2011) and my medication wore off. I woke up, paralyzed by pain, and I tried to focus on something, anything that would take my mind off of it long enough to allow me to start to move.
There was a clock on the wall, a favorite of mine, with three faces. They all tick in unison, and I focused on the sound of their ticking and then the sound of my heartbeat and I just had this wild story idea come to me— it isn’t the story Godspeed turned out to be, it was originally much darker— but it did generate ideas and quotes that turned up in the novel at the end. I grabbed the notebook where we were keeping a log of all my medications and jotted some things down without even looking, and then somehow I fell back to sleep. That is how the story got its start.
2. Which character spoke most clearly to you and wanted/needed to be heard the most?
I would have to say Quinn Godspeed himself. He was the one who kept me up nights when I was unable to work on the novel. He was misunderstood; I knew that, and his story and the reasons behind his actions needed to be fully explained. He and Lilibet are the two that I felt I would be failing most if I gave up and didn’t finish the book, and you know there were times I didn’t think I could. You were so encouraging to me, and I truly do thank you for that, Dianne.
3. Did any character surprise you by turning out to be different than the way you first conceived him/her?
They ALL surprised me. I started writing the book from Penn’s perspective, and in third person. I was thousands of words in when I realized that this wasn’t right. There was another voice, a louder voice, and she needed to tell the story. In first person! A shock to me because aside from a short story or two I had never written or wanted to write from that perspective.  I realized early on this story needed one voice to tell it, and that voice had to be Abigail’s. 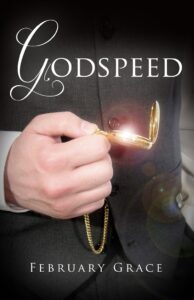 4. How did you hook up with Booktrope?
Last year, I received an email completely out of the blue from Katherine Sears at Booktrope, saying that she had read GODSPEED because someone recommended it to her, and that they were interested in it. At the time I was in the early days of a major family crisis and my health was even worse than usual— so as much as it pained me, I decided that I wasn’t ready to accept their most generous offer to work together. It always nagged at me, that decision.
So when I was able to write another novel, I remembered Ms. Sears saying that I was welcome to submit to them in the future if I wanted. I sent them the next book, they liked it, and while we were talking about publishing that one, the topic of GODSPEED came up. To my delight, they were still interested in publishing an edition of it, and I was over the moon. I was ready for it now— and jumped at the chance. So they have just released GODSPEED and will be publishing my next book too.
5. What are you working on next?
I am working on something I am not quite ready to give away the plot of just yet. It is called OF STARDUST, and it is a fantasy/romance. It is completely different from GODSPEED but I really love this book and the characters. I hope that readers will too. We are aiming to release it before the end of the year, so stay tuned.
6. What else would you like to tell us about GODSPEED?
In the end my hope is that these characters will make people stop and think, and perhaps see those they meet in the course of everyday life a little bit differently. I find myself thinking now of that old quote of much debated origin: “Be kind, for everyone you meet is fighting a hard battle.” And, of course, I hope they’ll fall in love with Quinn! :~)
Thank you so much Dianne for hosting me!
I am, of course, delighted to host Bru any time. I loved GODSPEED and can heartily recommend it to any fan of romance. And thanks to the generosity of Booktrope, you can win an e-book of GODSPEED by entering the contest below!