“A Texas Makeover of the Angel Story” via Joy Preble 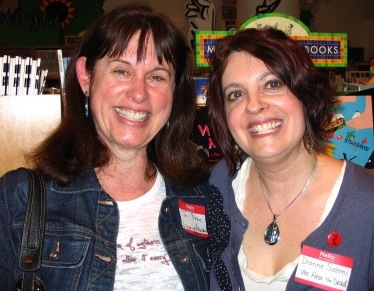 WAAAAY Back in March of 2010, I was invited to attend a launch party for the Sourcebooks Fire YA imprint at Books of Wonder in NYC. My debut book, WE HEAR THE DEAD, wasn’t due to be released until May, but I got to attend the event with other Fire authors such as Adele Griffin, Lisa Brown, Helen Ellis, Laura and Lisa Roecker – and Joy Preble, author of DREAMING ANASTASIA.
Then, last month, while I was celebrating the release of THE CAGED GRAVES, I saw on Twitter that Joy’s newest book, THE SWEET DEAD LIFE, was releasing the same day as mine. It seemed like a pretty big coincidence: Herbook has a grave on the cover; my book has a grave on the cover … Clearly, we were meant to launch more books together!
So, Joy is joining me here for an interview to talk about her new book. Here is the blurb from Amazon: 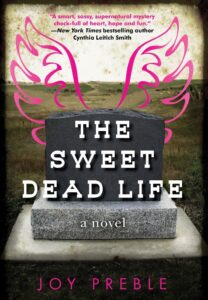 “I found out two things today: One, I think I’m dying. And two, my brother is a perv.”

So begins the diary of Jenna Samuels, who is having a very bad year. Her mother spends all day in bed. Dad  vanished when she was nine. Her older brother, Casey, tries to hold together what’s left of the family by working two after-school jobs—difficult, as he’s stoned all the time. To make matters worse, Jenna is sick. Really sick. When she collapses one day, Casey tries to race her to the hospital in their beat-up Prius and crashes instead.

Jenna wakes up in the ER to find Casey beside her, looking pretty good. Better than ever, in fact. Downright… angelic. The flab and zits? Gone. Before long, Jenna figures out that her brother didn’t survive the accident at all, and she isn’t just sick; she’s being poisoned. Casey has been sent back to help Jenna find out who’s got it out for her, a mystery that leads to more questions about their mother’s depression and their father’s disappearance.

1. Joy, our books (DREAMING ANASTASIA and WE HEAR THE DEAD) were part of the original line-up for the Sourcebooks Fire YA imprint back in 2010. But your book actually released in 2009, about six months before the imprint officially launched. How did that come about?
DREAMING ANASTASIA actually sold to Sourcebooks in late 2007, and at that time, the as yet unnamed Fire Imprint was scheduled to launch in 2008 or 2009. But things happen in publishing and plans change. And so since the book was ready even though the imprint wasn’t quite set, they went ahead and published it in September, 2009, under the Jabberwocky imprint, which was already up and going. Later editions – including one with a font change for Anastasia’s letters—have been published as a Fire book. So I was Sourcebooks Fire’s first YA novel… sort of!
2. DREAMING ANASTASIA became a trilogy, which must have kept you busy for a long time. When did THE SWEET DEAD LIFE come along? Did you have multiple projects going at once?
THE SWEET DEAD LIFE came about in spring 2011 – actually the day after I had turned in my resignation letter to my principal, telling him that I was going to try writing full time, at least for a few years! My 2ndeditor – I’m not sure if he was also yours—at Sourcebooks had moved to Soho Press to start the new Soho Teen imprint and asked me and my agent if I was interested in doing a project that he thought would be perfect for me. Of course I said, yes! So that did mean that I was working on ANASTASIA FOREVER and THE SWEET DEAD LIFE at the same time on and off. But as I was also no longer going to also be teaching 175 students, it wasn’t as daunting as you’d think!

3. You are my hero! Seriously. Because you were a teacher, then a teacher and an author, and now a full time author. I’m aspiring to follow in your footsteps but haven’t reached that point yet. Can you share a little about the journey?
Hah! I allude to it a little above, but if you want the fuller version…I will say that the thing about having worked for a number of years as a high school English teacher with a 6 class load with 30 students per class or more is that to survive, you become an endlessly working grader/reader/planner. The only weekend you actually don’t have something to do during the school year is the last weekend before spring finals. You grade everywhere – often 8 – 20 hours on a weekend as well and 2 -3 hours every night. So working like a crazy woman was pretty much the only thing I knew. I’m sure you can relate. I wrote in the late afternoons or late at night and of course all summer long I could write more hours. And somehow, DREAMING ANASTASIA got written and it found me an agent, who sold the book and eventually it was published.
The trick came when Sourcebooks asked for book 2, HAUNTED. So there I was, promoting DREAMING and writing HAUNTED and teaching those 175 students—and carving out family time and a bit of a life as well. Which was sort of okay in a crazy sort of way until somewhere in the middle, I ended up with thyroid cancer and had to have surgery. I don’t know if you knew that I met you in NYC and went home to have surgery that same week. (I am fine now, by the way, and hope to stay that way) And in the midst of all this, I was orphaned by two editors and a publicist. Somehow we sold ANASTASIA FOREVER at some point, too. And eventually I decided that this was a real career with real goals and a limited amount of hours in the day and that my passion was in writing now. So I took the leap and quit teaching. There you have it! We are poorer, but I do sleep now, which is nice.
4. I didn’t know about the thyroid cancer at the time, but I did find out later when you shared your story on your blog: seeing your dream of being published come true — and being hit so quickly afterward by such frightening news. But you beat it and published 3 more books (and counting)!
Now for the question I ask everybody. Are you a plotter, a pantster, or something in-between?
I used to be somewhere in between – usually writing about 50 pages to test the waters and then plotting in these loose bullet point outlines. Now I am an outliner, although still bullet point-y. I write novels in a three act structure. I write character sketches. I make charts. I ponder subtext. For me, this is what I feel most comfortable doing at this point in my career where honestly, expectations are much higher than when I was a debut author.
5. Another of my favorite questions – when you were writing THE SWEET DEAD LIFE, were there any characters who surprised you? Which character was the most fun to write about?
No surprises really in this book but I can definitely say that Jenna Samuels, who is the narrator, has been the most fun to write of any character I’ve ever written! She is sassy and smart and because she is 14 (she turns fifteen in book 2, THE A WORD), everything is a ‘first’ for her. I love her irreverent take on the world and particularly on the northern Houston suburbs. Jenna calls it like she sees it, such as this, said about the nurse who takes care of her in the hospital after she and Casey have their car accident: “I decided that the clogs were making Ed cranky. Just because the Crocs kiosk in the mall was still in business did not mean that one had to shop there.”
6. What do you know about yourself as a writer now, that you didn’t know when you wrote DREAMING ANASTASIA?
I would say, um, EVERYTHING. I was such a newbie amateur back then. I had NO IDEA.
7. What’s next for you? What are you working on now?
The sequel to THE SWEET DEAD LIFE, titled THE A WORD, is coming out in May 2014, so we’re editing that right now. Beyond that, I’m working hard on some projects I hope to be able to announce eventually!
8. I was trying to think what profanity began with A — but then I realized that the A Word might be Angel, huh? Or maybe Angel AND the other one?

Is there anything else you’d like to tell us about THE SWEET DEAD LIFE?
If you want a Texas makeover of the angel story with cowboy boots, irreverence, a sibling story, a mystery, and a growing amount of romance in book 2—plus breakfast tacos, kolaches, and the UT/A&M football rivalry, and a most unlikely hero, then this is the series for you! What better place than Texas to have angels walking amongst us. And who’s to say one of them isn’t the stoner dude next door. Seriously.
Thanks for joining us here today, Joy! You can find out more about Joy and her books at her website, and check out THE SWEET DEAD LIFE on Amazon or Barnes and Noble.

You can also win a signed copy of Joy’s book by entering the Rafflecopter Giveaway below. Contest is open to US residents until June 25.