Back to the 1990s: An Interview with Kimberly Garnick Giarratano 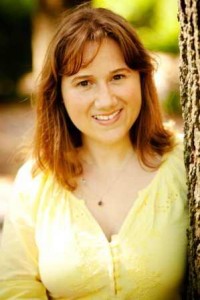 You write a book. It gets a starred review from School Library Journal. Later, you run across the writer of the review on Twitter. You follow each other. Later still, you find out she wrote a book, and it’s also got a graveyard in it. You read it. You love it.

That’s how I met Kimberly Garnick Giarratano, ended up reading Grunge Gods and Graveyards and asking her for an interview. Social media — it’s made the world so much smaller.

Parted by death. Tethered by love. Lainey Bloom’s high school senior year is a complete disaster. The popular clique, led by mean girl Wynter Woods, bullies her constantly. The principal threatens not to let her graduate with the class of 1997 unless she completes a major research project. And everyone blames her for the death of Wynter’s boyfriend, Danny Obregon. Danny, a gorgeous musician, stole Lainey’s heart when he stole a kiss at a concert. But a week later, he was run down on a dangerous stretch of road. When he dies in her arms, she fears she’ll never know if he really would have broken up with Wynter to be with her. Then his ghost shows up, begging her to solve his murder. Horrified by the dismal fate that awaits him if he never crosses over, Lainey seeks the dark truth amidst small town secrets, family strife, and divided loyalties. But every step she takes toward discovering what really happened the night Danny died pulls her further away from the beautiful boy she can never touch again.

1. Thanks for visiting my blog today, Kimberly! What was the original inspiration behind Grunge Gods and Graveyards?

When I was a teenager, I used to rent classic movies (on VHS) from the library and I had seen this movie called The Ghost and Mrs. Muir. It was about a ghost who falls in love with the young widow who moves into his seaside house. I had thought it was incredibly romantic – not because there was this mushy overture of sentiment but because they really couldn’t be together until the widow died an old lady. And yet they spent decades together – he a ghost and she living in his house. She never remarried because she was in love with this ghost that she couldn’t be with. So several years ago, I decided I wanted to write a YA version of this movie, but with 90s pop cultural references. 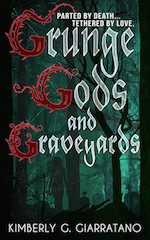 2.Even asking this question makes me feel old, but since your book is set in the 1990’s, is it considered historical fiction? Why did you choose the ‘90’s as the setting for your story?

I have no idea if the book is technically historical fiction – that’s an excellent question. Although, I would think it is. The 1990s were a very different time, especially regarding technology. I mean, kids had beepers in high school! And then they had to use a pay phone to call the person who beeped them. Also we listened to music on cassettes and CDs. I used to order my music from a BMG catalog. My mom would mail it in and then I’d get my CDs weeks later. All that stuff seems as archaic as the 1890s. I chose to set my novel in the 90s because I was a teen in the 90s and I desperately wanted to incorporate 90s alternative music into the story. (I still listen to my favorite 90s bands. Radiohead has new albums out but I rarely listen to anything past OK Computer.) Going back to the technology aspect, the 90s setting also allowed me to bypass certain plot pitfalls. For example, without cell phones and texting, one character couldn’t warn another character about impending doom. This sets up conflict and heightens tension. I don’t have to worry about a reader rolling their eyes and saying, “Duh. She could’ve just texted her a warning.”

3. Tell us about your path to publication.

My path to publication was fairly simple in that I wrote a book, revised it a bazillion times, and queried it. I sent the manuscript to some agents, got two full requests and the rest were rejections. I then started looking at small presses. The more I researched them, the more I realized they might be the better avenue for me. Small presses have the advantage in that they can work more closely with the author throughout the creative process (I had a say in my cover design!). Also, since Grunge Gods was my first novel, I really wanted more individual attention. I researched a bunch of small presses on Absolute Write. I checked out their titles and most importantly, I critiqued their cover art. I found out about Red Adept Publishing (their covers are gorgeous) on Absolute Write’s forum and then I googled the hell out of them. I couldn’t find anything negative about them anywhere. I submitted Grunge Gods to RAP and a month later, I received a phone call that they had selected it for publication. Even then, I asked my publisher for references. And she gave me the names and phone numbers of two authors that had published with RAP. I called them and spoke to them for an hour. I felt good about signing a contract with RAP and a year later, I am still happy with my publisher. I had terrific editors who made the book better than I ever thought it could be and my cover is the bomb. Publishing through a small press was definitely the best decision I could’ve made.

4. One of the things I enjoyed about the book was the rich cast of characters – all of whom had complicated back stories which were revealed bit by bit. How did you figure out where, when, and in what order to include these back stories?

First, thank you. Characterization is my favorite part of writing. I like making up people. I like having a cast of complex characters. No one in real life is all good or all bad. As for their backstories, I’m not sure if I consciously decide where I want to insert their histories. Maybe it’s the mystery writer in me that I like to leave a lot to be discovered about my characters as the story unfolds. I guess my strategy is I take the most interesting part of their personalities and reveal that aspect at the end.

5. Ditto with the complexity of the mystery. I know from writing The Caged Graves that it took several tries (and the help of an editor) to get all the various clues inserted in the right places and in the right order. Did you have a specific strategy for outlining your mystery?

I didn’t have a specific strategy, but I should have. It took a lot of revisions (and hair pulling) to get the clues right. Like you, my editor helped me tighten the plot. I was inserting last minute clues into the manuscript on my second and third passes of content editing. Now, I have a better outlining process. I write scene lists and I figure out where the clues should go before I draft. That said, I’ll still have to insert clues into the manuscript during revisions. Writing mysteries are hard. They’re so awesome to read, but man, are they a struggle to plot.

6. Did any of the characters surprise you while you were writing the story? Turn out different than you expected or planned? Who’s your secret favorite?

Scott turned out differently than I expected, but I don’t want to elaborate on why for fear of spoiling the book. I have to say, one of my favorite characters is Nutley. When I wrote him, I pictured Jordan Catalano from My So-Called Life. Quiet, brooding, hot.

More writing. I’m working on another YA ghost story/mystery, this one set in present-day Key West. It’s dual POV, which has its own set of challenges. I have some truly unique characters in this story and I am so excited about them. I’m also outlining a YA historical mystery set in 1955 in which an Argentine immigrant stumbles upon the dead body of her soon-to-be stepfather and she has to piece together the mystery surrounding his death. I have an idea for a middle grade adventure series starring my grandparents as children. My brain is swirling with story ideas. But I also have three small kids, including one newborn, so there’s that.

Thanks again, Kimberly! You can find Kimberly (and her blog — I just found out she has one and have to add it to my list) at her website. And you can find Grunge Gods and Graveyards at Amazon and Barnes & Noble, just for starters!