Do You Believe in Magic?

Today I’m very excited to be taking part in the blog tour for Tracy Tam: Santa Command by Krystalyn Drown – a MG adventure that combines science and fantasy in a thoroughly satisfying way. Krystalyn is a long-time critique partner of mine, and I am thrilled about her MG debut. First, the book blurb:

Tracy doesn’t believe that Santa can deliver all of those presents in one night with out a little help from science. A flying sleigh can only be powered by jet engines, and Santa’s magical abilities can only be the result of altered DNA. In order to test her theories, she sneaks onto Santa’s sleigh and ends up at Santa Command, the place where a team of humans monitors Santa’s big night. When Tracy attempts to hack into their computers, she accidentally introduces a virus to their system. As a result, three states get knocked out of sync with the rest of the world. Before the night is over, Tracy has to fix time and help Santa finish his deliveries. And she has to do it all with Santa’s magic, which she doesn’t believe exists.

1. Krystalyn, I’ll never forget when you sent me the first few pages of Tracy Tam in their first draft form. I was immediately hooked, and when I shared your opening with my fifth grade students, they were hooked, too. Tell me, what inspired the story?

I had a dream that I can’t quite remember, but it involved all of the holiday characters like Santa and the Easter Bunny. I wondered what it would be like if all of the characters were drones controlled by someone in a command center. The first chapter of Tracy Tam emerged from that idea. 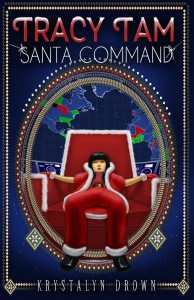 2. Speaking of that first page, you and I discussed at length the issue of starting a MG book with a scene from an adult’s perspective. That’s supposed to be one of the industry No-Nos, but as I mentioned above, this scene was a unique hook for your story. When you actually worked with an editor at Month9Books, did this issue come up?

Before I signed with them, they discussed with me some of the changes they wanted to make. Thankfully, the first scene was never put on the chopping block. There was one scene later on that was shifted to Tracy’s point of view, which wasn’t an issue, but for the most part, all of Phil’s  scenes were kept intact. He even got an extra chapter in editing that I didn’t initially plan. And even though Phil is an adult, he’s a fantastical character himself. What person wouldn’t want a front row seat for Santa’s big night?

3. Tell us about your writing style.

I need to know the major plot points, but beyond that, I have a hard time plotting. I write from point to point, and allow the characters to show me what they’re made of. Then, when I’m about half way through and really know the characters, I end up starting over. My first drafts take forever to write, but the editing is much easier.

4. Talk a little bit about Tracy herself.

She’s a ten year old girl on a mission. She’s smart and ambitious and is used to getting what she wants. However, she doesn’t realize that sometimes too much ambition can lead to trouble, like crashing computers or the stopping of time.

5. I know you were surprised to see Tracy Tam: Santa Command highlighted as a book promoting diversity, since Tracy’s ethnicity has no bearing on the story. How important is it, do you think, to have multi-racial protagonists appear regularly in books even when (maybe especially when) race is a non-issue in the plot?

I think it’s important because readers of every race and color need to be able to find books where they can say, “That could be me. I could do that.” When Tracy first popped into my mind, she was Chinese American. It was never a conscious decision to make her a certain ethnicity. That’s just who she was.

6. Were there any characters who surprised you when you were writing this book – characters who diverted from your original plan or changed the way you viewed the story?

I’m pretty sure you already know the answer to this question. (Yes, I did. That’s why I asked!) I mentioned in one scene that a character had a son. You asked to meet the son, and he became Jared. He went from a character that didn’t really exist to a POV character. What’s more, he became almost a yin to Tracy’s yang. They both have very differing views of magic, and they must come together if they want to save the day.

7. What else would you like to tell us about Tracy Tam: Santa Command?

This is my favorite book that I’ve written. I’ve always been fascinated by magic, and by writing this book, I got to play with magic and hopefully create a little as well.

I’m excited about Krystalyn’s release can’t wait to see what’s next for Tracy. (Spoiler alert: This book might not be the last we see of Tracy!) Want to do a little early Christmas shopping for MG readers on your list? You can find Tracy Tam: Santa Command at:

Month9Books is giving away 5 digital copies. Enter the giveaway below.