“Forget the Past”: An Interview with Joshua David Bellin 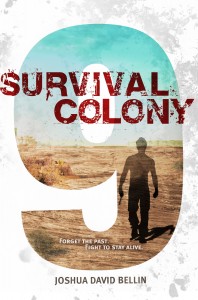 Next week, Joshua David Bellin’s debut book, Survival Colony 9, launches, and today I have Josh here to talk about his path to publication and the writing of his book.

Querry Genn is in trouble.

He can’t remember anything before the last six months. And Querry needs to remember. Otherwise he’s dead weight to the other members of Survival Colony 9, one of the groups formed after a brutal war ravaged the earth. And now the Skaldi have come to scavenge what is left of humanity. No one knows what the Skaldi are, or why they’re here, just that they can impersonate humans, taking their form before shedding the corpse like a skin.

Desperate to prove himself after the accident that stole his memory, Querry is both protected and tormented by the colony’s authoritarian commander, his father. The only person he can talk to is the beautiful Korah, but even with her, he can’t shake the feeling that something is desperately wrong. And that his missing memories are at the very center of it.

1. Josh, thanks for being here today. I’m going to start you off with a question I ask almost everyone: What was the original inspiration behind Survival Colony 9?

Thanks for having me on your blog, Dianne! There were actually two inspirations for Survival Colony 9: a story idea I jotted down years ago about a boy with memory loss, and a much more recent, vivid dream that contained the story’s desert setting and the image of camouflaged people traveling across the waste. I put those two ideas together, and bingo! I had a novel. (Well, a year and seven complete revisions later I did.)

2. Please tell us about your path to publication!

In a way, I feel as if I’ve been moving toward publication for forty years. I wrote my first (unfinished) novel at age eight, my first completed novel at age sixteen, and the first novel I tried to connect with an agent at age twenty-two. Then there were the twenty or so years I set aside creative writing for literary scholarship, and published three academic books and a bunch of articles. Even when I returned to fiction in 2008, the path wasn’t entirely straightforward: I wrote a bunch of short stories first, started one novel that self-destructed midway through, completed another that I loved but no agent would touch, completed Survival Colony 9 and found an agent but had to part ways with her when it turned out our vision didn’t match, and finally found another agent (Liza Fleissig of Liza Royce Agency) who was the novel’s best advocate and who found a home for it with Margaret K. McElderry Books. I know some people dream of overnight success, but the reality for most authors is more like mine: a long apprenticeship, some disappointments, and then—at last—the dream come true. 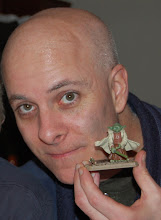 3. What is your writing style like? Are you a plotter, a pantster, or something in-between? Did you find, (as I did), that your style changed when you had to write sequels under contract?

Oh my gosh, Dianne, I am the world’s worst pantser! I’ve tried to plan things out beforehand, but I always end up departing from my plan so radically I might as well not have bothered. For Survival Colony 9, all I had when I started was the setting, the name of my narrator (Querry Genn, a teen with memory loss), and the barest idea of a monstrous antagonist. Everything else emerged during the writing. This method (if you can even call it a method) produces lots of amazing discoveries, but also lots of plot holes, continuity errors, and other lapses that have to be fixed in revision. But I’ve stuck to my pantser ways, even through the writing of two sequels to Survival Colony 9. I’m currently planning a YA alt-history which will require a ton of research, so maybe that’ll change me. I doubt it, though!

4. Without giving away any spoilers, can you share any details about your revision process with your editor? Things you had to change, compromises you had to make, etc?

Excellent question. For the most part, I saw eye to eye with my editor, Karen Wojtyla; or to put this another way, she saw things in the manuscript I hadn’t even noticed—themes, character relationships, symbolic echoes—and she encouraged me to deepen and enrich those elements. She did ask me to heighten the tension in the early chapters, play up a love interest, and make other substantial changes, but in all those cases I trusted her instincts and had no problem doing what she asked. Only in one instance did we go back and forth a few times. She had a huge problem with one of the features I’d given the story’s monsters—the Skaldi—and it took me a long time before I realized she was right and I had to give up something I loved for the sake of the story.

5. Tell us about the Skaldi.

Nice transition! The Skaldi are creatures that appeared in Querry’s world shortly after war and environmental collapse turned the planet into a wasteland. No one knows where they came from, but everyone knows what they can do: consume and mimic human beings. This makes them particularly insidious, because you never know when one is among you. I worked long and hard to make them not only coherent—which is always an issue when you’re creating a brand-new life form—but horrifying, because I’m a big fan of scary monsters. As I mentioned, my editor felt (and I ultimately agreed) that I needed to modify them somewhat in the interest of story logic, but she and everyone who’s reviewed the book has found them scary as heck, so I guess I succeeded there!

6. Were there any characters that surprised you during the writing of this book? Characters who didn’t follow the plan or who invented themselves out of nowhere?

All the characters grew as the tale evolved, which is one of the great things about writing: your own creations start to seem like independent beings, with all the mystery and beauty that entails. But there was one character, a teenage girl named Korah, who really surprised me. Initially, she was a minor character, someone Querry could admire from afar. But she absolutely refused to stay that way. Before I was finished, she became a major player in the story, with multiple scenes, lots of dialogue, a well-articulated history, and a complex relationship with Querry and other characters. She’s now one of my favorite characters, probably because she refused to play by my arbitrary rules and made the story much better as a result.

7. What else would you like us to know about Survival Colony 9?

Only that I’d love to hear what readers think about it! As a debut author, I’m eager to connect with readers through my website and other social media—and, if possible, in person. I’ve created a Common Core aligned curriculum guide, which teachers can access through my website, and I’m also on Skype, so I’m open to conversations with classrooms or book clubs or whatever. As you know, Dianne, writing can be a lonely profession, so I hope readers will be in touch. I promise I’ll reach back!

I look forward to reading Survival Colony 9! You can find Josh at his blog, The YA Guy, Twitter, and Facebook. Add Survival Colony 9 to your reading list on Goodreads, or find it on Amazon.