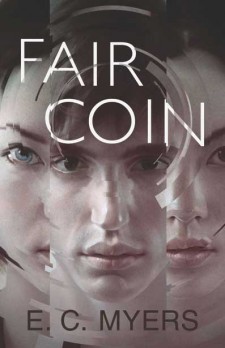 When I met E.C. Myers at Elisa Ludwig’s launch party for PRETTY CROOKED, he shared the elevator pitch for his upcoming novel, and I thought I might enjoy it.  I didn’t know I was going to finish it within 24 hours and then go into withdrawal.  In fact, I wasn’t even halfway through the novel when I started thinking of interview questions for him. Science fiction fans, sit up and take notice. FAIR COIN is a roller coaster ride of a YA sci fi novel that’s a little bit THE MONKEY’S PAW and a little bit QUANTUM LEAP and a little bit THE GREEN FUTURES OF TYCHO.

Synopsis: Sixteen-year-old Ephraim Scott is horrified when he comes home from school and finds his mother unconscious at the kitchen table, clutching a bottle of pills. The reason for her suicide attempt is even more dis­turbing: she thought she’d identified Ephraim’s body at the hospital that day.
Among his dead double’s belongings, Ephraim finds a strange coin–a coin that grants wishes when he flips it. With a flick of his thumb, he can turn his alcoholic mother into a model parent and catch the eye of the girl he’s liked since second grade. But the coin doesn’t always change things for the better. And a bad flip can destroy other people’s lives as easily as it rebuilds his own. The coin could give Ephraim everything he’s ever wanted–if he learns to control its power before his luck runs out.

1.      What was the inspiration for FAIR COIN?
I don’t know what, if anything, triggered the idea, but it began as a scene playing in my mind: A boy tossed a coin into a fountain and made a wish, then a ripple spread from the fountain, changing the world around him to make his wish come true. It took a long while for me to develop a story from that visual prompt; I scribbled it down in a notebook and focused on other stories. But every now and then I’d find myself thinking about that idea again and I’d add a few more details about the characters and the coin, until one day I had enough pieces to sit down and attempt writing the novel.
2.      Which authors have influenced your writing?  What books are your stand-by favorites, that you’ll never tire of reading?
Probably every book I read influences my writing in some way, but authors like William Sleator, John Bellairs, Roald Dahl, C.S. Lewis, E. Nesbit, and Rod Serling had big impacts on the types of stories I want to tell and how I tell them. Some contemporary YA authors whose work inspires me include Scott Westerfeld, John Green, Philip Reeve, and Maureen Johnson—all masters of world building, plot, complex characterization, and witty dialogue.
I don’t have much time to reread my favorite books—there are so many new books to experience!—but I like to revisit the Chronicles of Narnia, Tolkien’s The Hobbit and The Lord of the Rings, Robert C. O’Brien’s The Silver Crown, Sleator’s Interstellar Pig and Singularity, and Doomsday Book by Connie Willis.
3.      You have a fairly long list of published short works listed on your website! In what genres have you written? Do you have a favorite short story?
I tend to favor slipstream fantasy and science fiction, which are what I most like to read, but I’ve also tried writing horror, erotica, and “literary” contemporary fiction, with varying degrees of success. My favorite short story is a fantasy titled “Collection Day” that has yet to be published. Another favorite, “My Father’s Eyes”, is a science fiction story that appeared in an indie magazine called Sybil’s Garage a couple of years ago.
4.      I was impressed by the complexity of FAIR COIN’s plot, which kept me guessing all the way through.  Did you plot the story out completely before writing the first draft – or did you fly by the seat of your pants? How many drafts did it take you to get it exactly right – and did you make any drastic changes along the way?
Thank you! I usually don’t outline stories, but before starting a draft I do know the major plot points and scenes. With Fair Coin, I basically made things up as I connected the dots — (Yay! Another pantster, says Dianne) — which was a great way to keep me interested and moving forward, because I wanted to find out what happened next too. I let the characters and the plot develop fairly organically until I have a complete draft, then I review what my subconscious created, decide what’s worth keeping, figure out what it all means, and try to make it look like I planned it that way from the very beginning. (Ha! Me too!)
I did four drafts before I thought it was good enough to query agents with, then I worked with my agent on another draft and still another with my editor. The biggest changes happened between the first and second draft—the original ending was completely different and minor characters got much bigger roles. Between drafts three and four, I deleted the first few pages, and in the final draft, I jettisoned a minor subplot that still wasn’t working.
5.      Which character – good, bad, or in-between – was the most fun to write?  Were there any characters who surprised you?
Nathan was the most fun, because he gave me the freedom to be as goofy and irreverent as I wanted. Mary Morales surprised me the most; she was just supposed to be a minor character, but she kind of hit it off with Ephraim, so I had to find more for her and her sister to do. And they ended up being way more important to the story in later drafts.
6.      What else would you like to tell us about FAIR COIN?
Just that Fair Coin wouldn’t exist in its current form, or perhaps even at all, if I hadn’t had unflagging support and smart advice from my talented family, friends, writing group, beta readers, agent, and editor, as well as occasional encouraging words from near strangers on the internet. To write a book and stick with it until publication, you need people who believe in it and you—sometimes more than you do yourself. I love this novel, not just because it was my first and because it proves that hard work and persistence are rewarded, but because so many people I love and respect had a hand in its success.
Now that the book is out there, I appreciate everyone who takes a chance on a new author and reads it, reviews it, recommends it, or tells me that they enjoyed it. And thanks to you and everyone else who has given me the opportunity to talk about Fair Coin and myself in a public space like this. One of the things that made me want to become a writer was the wonderful, supportive literary community, and I feel so lucky to be a part of it.
Thanks for taking the time to answer my questions, E.C.! I’ll leave everybody with the trailer for FAIR COIN …