Today, I’d like to welcome Esther Goldenberg, who is here to discuss her debut novel, Hypatia Academy, and her writing process. 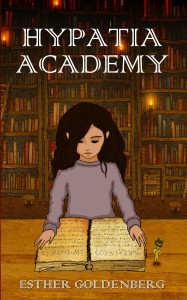 Twelve-year-old Hope was having a good year so far. She enjoyed hanging out with her friends and playing with her dog, Zamboni. Then one day, everything changed. Hope was taken to the mysterious Hypatia Academy where she found invisible bullies, ancient magic, and even little green men. It is Hope’s mission to find the powerful pearl that will save the world from the spirit of the ancient Egyptian sorcerer, Ramus. Her new friends are willing to help her, but will it be enough? Hypatia Academy is the story of one girl’s unintended quest to find the source of her own strength. Along the way, she learns to confront fear, ask for help, and laugh even when things are tough.

I live in Maryland, just outside of Washington, DC, with my two daughters and my dog. I was an elementary school teacher for many years. I’ve written several children’s books. Hypatia Academy is my second book to be published. The first was a text book.

The real Hypatia lived in Alexandria, Egypt around the year 400. She was unique in that she learned and taught astronomy, mathematics, philosophy, and other subjects. In those days, women didn’t have that opportunity. But her father taught her, and she later became a teacher. Unfortunately, it upset many people that she was educated, and in the end, she was stoned to death.

There were two main things that were the inspiration. One was the story of Hypatia herself. I thought it was an interesting story, and one that I had never heard before. The other was the desire to show a female main character who liked math and was strong. I wanted to write a girl who other girls could see as a role model. We all go through difficult times. Hope’s challenge was a quest to save the world. Thankfully we’re not all in that position, but we can all use role models.

I wrote the beginning of Hypatia Academy many years ago. After that, I wrote the book out of order. I had a general sense of the story in my head and I wrote scenes as I thought of them. There were some parts that I knew were going to happen, the talent show, for example, and I held a place for them but didn’t write them until after I’d written the ending. Once I’d written the main parts, I went back through and filled in some of the scenes. I eventually made an outline when the book was about 75% finished in order to make sure I got everything in the right order and didn’t leave anything out.

As a teacher, I’m a firm believer that students – kids and adults – need to explore and find what learning and working styles work best for them. What works for some people won’t work for others. If I’d had to write Hypatia Academy in order, I’m not sure I would have been able to do it. Writing it this way worked well for me.

Kornelius was definitely the most fun character to write. He adds humor to the whole book and I loved inventing silly things for him to do. It was also great to write someone who could do things that people can’t do – like dash off and get a flashlight and be back before the door closes. The challenging thing about writing Kornelius’ dialogue was remembering to write in his unique way of speaking.

This series is mostly aimed towards third and fourth graders who struggle with reading. This is a population which often has trouble finding good books to read because the books at their reading level are boring for them, and the books at their interest level are too hard to read. My Nutty Family is easy to read, but funny enough to keep older kids laughing. Younger readers will love it, too.

Thanks for the interview, Esther! I love that you’ve brought Hypatia out of the lost depths of history, and My Nutty Family sounds like a lot of fun, too!

You can find Esther at her website — and Hypatia Academy on Amazon.