Mistaken Identity, Romance, and Murder: An Interview with Marcy Hatch 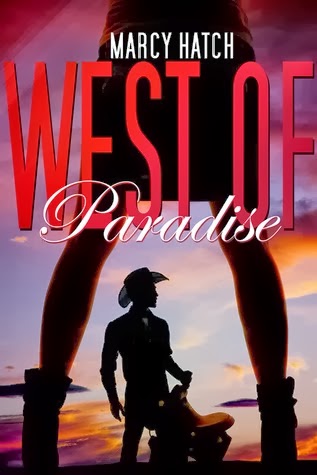 Marcy Hatch is one of my oldest blogging buddies and alpha readers, as well as my partner in First Impressions. So I’m delighted to spread the news about West of Paradise, her debut novel releasing this week from WiDo Publishing – a book I read wa-a-a-y back when it was just a manuscript.

Separately, Katherine Kennedy and Jack McCabe are drawn to Paradise Tours on the privately owned Cristobel Island, a resort promising life-altering adventure — just choose the time and place.
They find themselves over 125 years in the past, 1881 to be exact. Neither of them knows the other is a fellow time-traveler. Jack’s at the top of his game — until his run-in with Alanna McCleod, the beautiful but deadly train robber. As for Katherine, she no sooner lands back in time than she’s mistaken for Alanna McCleod and can’t understand why — until she sees the wanted poster.
Set in the Old West, this high-spirited tale of mistaken identity, romance, and murder is part historical fiction, part time travel fantasy, and completely captivating.
Today, I’m interviewing Marcy about her new book and her journey to publication.
1. West of Paradise is your debut book, but it had a winding road to publication. Can you tell us when you wrote it, when you queried it, why you shelved it, and – most importantly, what made you decide to take it off the shelf and dust it off?
West of Paradise was the third complete book I’d written and I was querying it when I first started blogging in 2009. I got quite a few positive responses but after all was said and done, no takers, and I started working on something else. After seeing a few folks get deals with smaller publishers, I wondered if that might not be a good place for my story and so decided to query again.
2. What was the inspiration behind West of Paradise? Did you set out first to write about time travel? Or about the Old West?
Oh, the Old West for sure. I’ve always loved a good historical romance, one with plenty of romance AND history. I like all those details of what people wore, how they traveled, what they ate. But if I had to pick something specific I’d probably say A Knight in Shining Armor, by Jude Devereaux. It’s a great time travel romance. 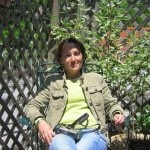 3. Having read early drafts and several revisions of this novel, I already know how much research went into your depiction of the Old West. How did you do your research? What details were the most difficult to pin down?
Well, I’m a history major, so I happen to have a lot of books about history and quite a few about the Old West specifically. I also bought a few, and I used the internet where I was lacking. Some of the sites devoted to Tombstone were especially helpful as were some old maps that helped me navigate around the town as it was. It wasn’t difficult, but it was time consuming!
4. I also know you experienced the pain of many historical fiction writers – cutting some of those delicious historical details you unearthed for the sake of pacing. Let me ease the pain by inviting you to share something you cut.
Oh, you are so sweet to offer, but just the first paragraph of what was originally chapter 16 – yup, the whole chapter ended up on the cutting room floor!
Jim Woolbridge had been a Pinkerton Agent for almost a year when the Adams Express was robbed in 1878. Over $700,000 in cash, bonds, and jewels had been stolen. Robert Pinkerton, who by that time had taken over the management of the business along with his brother William, put Jim on the case with the more experienced Larry Sweet. Jim Woolbridge actually met Larry Sweet for the first time in New York City, where the messenger had been held for questioning.
5. Many of my readers know you are my partner-in-crime for First Impressions. They may not know it was YOUR idea. Can you tell us what inspired you to offer first page critiques?
I thought it would be fun AND educational for everyone involved, including myself. I still think it’s fun and I learn more with every submission we get.
6. I also happen to know that you write in widely diverse genres. Can you tell us a little about the projects you’ve worked on recently as well as the one in progress?
Oh, wow, well, I’ve written a few books since West of Paradise…
GRIMOIRE – A Witchy YA Regency Romance
THE UNSOLVED CASE OF KASSANDRA DYER – NA Contemporary
NO REST – NA Scifi
PEACE AND FORGIVENESS – YA Paranormal – my current wip.
7. What else would you like us to know about you or West of Paradise?
Just that I still love it. Even now after having read it God knows how many times, I still love it. It’s a fun romance throwing modern day people into the past. Think Tombstonemeets Romancing Stone 🙂
To help celebrate Marcy’s debut, I’m giving away a copy of West of Paradise. Simply leave a comment on this post to be entered in the drawing by this Sunday at midnight, and I will buy you a paperback copy! (Trust me. You won’t be disappointed. I’m reading a galley of it right now for review purposes and enjoying it all over again.)