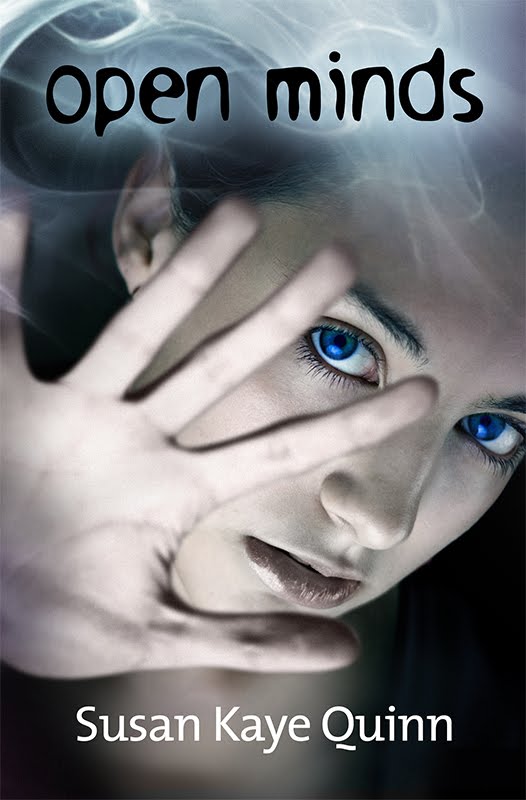 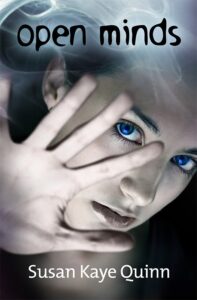 When everyone reads minds, a secret is a dangerous thing to keep.

Earlier this month, Susan Kaye Quinn launched her new book OPEN MINDS with a fabulously successful online Launch Party. Today, I bring you an interview with Susan from a writer’s perspective.

1. What was the inspiration for Open Minds?

It all started as a 1st paragraph contest on Nathan Bransford’s blog. I didn’t have a “catchy” first paragraph for any of my current stories, so I decided to write a paragraph for a story that didn’t exist! I had been playing around with a story idea about a boy who was a touch empath (he could sense feelings by touch), but I wasn’t sure that would work. The night before the contest was due, I was drifting off to sleep when the image of a girl sitting in a classroom full of mindreaders popped into my head. Only she couldn’t read minds and she was painfully isolated, an outcast. I jumped out of bed and wrote the paragraph. A few weeks later, I still couldn’t get the image out of my head, and I knew I had to write Kira’s story. (BTW, I didn’t win the contest!)

2. In Open Minds, everyone except Kira can read minds. How does a society survive if everyone’s inner (and possibly unpleasant) thoughts are open for inspection?

Great question! It certainly transforms everything from social niceties (there aren’t many) to political structures (there are now honest politicians) to architecture (keeping everyone separated enough to not read your neighbor’s thoughts). But the initial time of change was one of great turmoil, as you might imagine. When I was researching the story, I actually googled “what would happen if everyone read minds” and found a thread where the discussion was evenly split between people that believed the world would end, and those that thought it would bring peace on earth. In Kira’s world, truth is something everyone takes for granted, as well as knowing all the unpleasant thoughts of their neighbors. The rumor mill is a force of nature unto itself. But society survives and adapts, as humans are wont to do.

3. What, exactly, is a mindjacker?

A mindjacker can jack into your head and control your thoughts, emotions, and even tamper with your memories. Anything your brain controls (which is basically everything), a mindjacker can mess with. You can imagine having one of these living next door might be a bit problematic.

4. Which character in Open Minds was the most fun to write about?

Simon. In every book, I have a favorite character, which is probably wrong, but I can’t help it. He has great internal conflict and he’s the bad boy (I have a bit of a weakness for those). But mostly he was fun to write because he brings out all of Kira’s hopes and dreams and flaws.

5. Any surprises for you while writing this story – plot twists you didn’t plan, characters who took the wheel and hijacked your outline?

This entire book was a surprise! I pantsed it from the beginning, starting out with just that paragraph about a room full of mindreaders and not a lot more (certainly not an outline). Here’s an excerpt from my notes as I was writing the novel during NaNo two years ago, where I discover there are mindjackers in the story:

Whoa! This story is about mind control! Uh, duh. Well, the persuasive kind to get Kira to join their “cult” – isolate, get them dependent, make them allied with you (us against the world) and then BAM! lower the boom, ask them to do the deed.

Yeah, I talk to myself in my notes. And I kinda ramble, too, apparently. But I truly didn’t know the story was about mindjacking when I started writing it.

6. Open Minds is the first book in a planned trilogy. When can we expect to see future installments?

I plan to release CLOSED HEARTS in 2012 – in May, if all goes according to plan, later if it doesn’t. I have CLOSED HEARTS and Book 3 all outlined and planned out (unlike OPEN MINDS) and I’m drafting CLOSED HEARTS right now, for NaNo 2011.

7. Is there anything else you’d like to tell us?

It’s an amazing feeling to be writing the second book while people are reading the first! It’s inspirational and all kinds of cool. So, if you read OPEN MINDS, write a review or drop me a tweet (@susankayequinn) and let me know what you think!

Sue, thanks so much for the interview and good luck with your NaNo writing of CLOSED HEARTS! (Is that an awesome follow-up title to OPEN MINDS or what?) You can find Sue at her website.