QUEST OF THE HART: An Interview with Mary Waibel 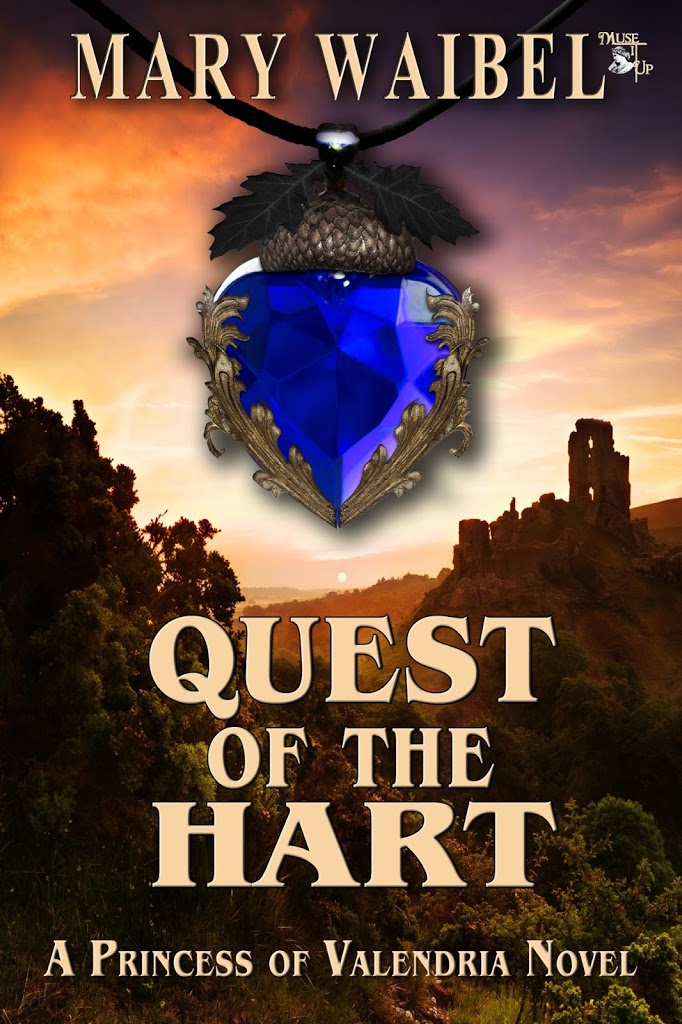 Mary Waibel, one of my wonderful beta read partners, is here today talking about her debut novel, QUEST OF THE HART – a reverse Sleeping Beauty tale in which a princess must rescue her sleeping prince.
1.  Can you tell us about your path to publication?
Like many, I wrote a book, polished it up, and queried waaay to soon. Not to be deterred, I wrote another. This one I spent more time on, refined it, really researched the agents and sent it out. I had several requests for fulls, but no bites. Deep down, I knew there was something off in the story, but couldn’t say what. (It’s still in my pile to go back to and fix.) So, I went back to my first book and did a total rewrite. The final product is alike only in character names and the idea of a princess rescuing a prince. This time, when I queried, I included some small publishing houses in the mix. I got requests for fulls from two. And then I waited. And waited. And waited. When the offer from Muse came, I was one week away from going out on my own and self-publishing. I’d researched it a lot while waiting. Quest of the Hart released with them on April 19th, and Charmed Memories, a companion novel, will release in August.
2. What is your writing process like?
Are you a pantster, plotter, or something in between? I’m pretty much a panster. I’ll have an idea or a character come to mind, and I’ll spend time thinking about what I want to happen. I mull it over while I’m driving, in the shower, doing laundry (can’t tell you how many great ideas I get swapping clothes from the washer to the dryer!), and as I’m drifting off to sleep. I’ve learned at night to think in big picture things, not specifics of dialogue, as I can’t remember it, and if I’m trying to go to sleep, I don’t want to jot it down in a notebook. When I’ve thought of enough to get somewhere in my story, I write a first draft. These are always short and bare bones on description. I spend a lot of time going back and fleshing out my scenes once I have a frame of sorts. And yes, my drafts can change so much from one to the next that it seems like a completely different story.
3. Which character in QUEST OF THE HART was most fun to write about?
Did any of them surprise you? I had the most fun writing Arabella, the villainess. I’d never written from the POV of the bad guy before, and it was fun to see where I could go with her. The two sisters, Maeryn and Deirdre, surprised me. They had a bit more backbone than I anticipated when I started out with them.

4. What part of the story challenged you the most?
How to show Kaylee falling in love with a prince she barely knew who the reader barely gets to see, as he’s under a sleep spell for most of the story.
(That IS tricky, and now I’m wondering how Mary pulled it off. She doesn’t say, and I guess there’s only one way to find out …)
5. What else would you like to tell us about QUEST OF THE HART or your next book, CHARMED MEMORIES?
Quest of the Hart is a reverse sleeping beauty, where the princess goes on the quest to save the prince. It’s told from two points of view, the heroine and the villainess, and is available from MuseItUp Publishing.
Charmed Memories follows Kaylee’s brother Trevor. After learning the girl he loves might be the missing princess he’s to marry, Trevor vows to recover her memories and prove she belongs with him.  It will release in August from MuseItUp Publishing