Sisters and Homicidal Manuscripts: An Interview with Therese Walsh 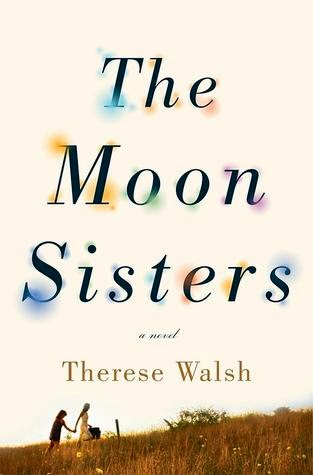 Recently, I reconnected with an author I exchanged emails with a few years ago. She wrote me and kindly thanked me for a review I wrote for her debut book. (This was back in my Amazon Vine days.) Now, I’m excited that Therese Walsh, author and founder of Writer Unboxed, is a) publishing her second novel and b) here today for an interview!
The Moon Sisters:  After their mother’s probable suicide, sisters Olivia and Jazz take steps to move on with their lives. Jazz, logical and forward-thinking, decides to get a new job, but spirited, strong-willed Olivia—who can see sounds, taste words, and smell sights—is determined to travel to the remote setting of their mother’s unfinished novel to lay her spirit properly to rest. Already resentful of Olivia’s foolish quest and her family’s insistence upon her involvement, Jazz is further aggravated when they run into trouble along the way and Olivia latches to a worldly train-hopper who warns he shouldn’t be trusted. As they near their destination, the tension builds between the two sisters, each hiding something from the other, until they are finally forced to face everything between them and decide what is really important.
1. Therese, thanks for being here today! Your debut novel, The Last Will of Moira Leahy, was published in 2009 to glowing reviews. Can you tell us about your path to publication for this novel?
Thank you for your kind words, and for being one of my first reviewers!
The path to publication was littered with sheets of crumpled, inked-up paper; I think it’s fair to say that. I began writing TLWoML shortly after 9/11, because suddenly life felt very unpredictable and I’d wanted to try my hand at adult fiction for some time. (I’d spent a few years writing children’s picture book manuscripts.) I worked for a year on a draft that ended up being overlong by about 30,000 words. I spent another year editing it—really learning how to choose powerful words—and then I sent the story to agents. Rejections began pouring in, but they were different than the rejections I’d received for my children’s picture book manuscripts; these rejections were personalized and contained counsel for making the story stronger.
After a time, I decided to take the advice that resonated with me and completely rework the story—changing the voice, the point of view, and adding an entirely new section called “Out of Time,” which showcased the history of my twin protagonists as they grew and took us up to The Big Event that Changed Everything. That rewrite took about a year, and then I spent another year editing it. This time I found an agent, Elisabeth Weed, who sold the book quickly to Random House in a major two-book deal. I could hardly believe it.

2. According to your author profile on Amazon, the working title of The Moon Sisterswas The Book That Tried to Kill Me. Tell us more.
It was that two-book deal. My debut wasn’t born to this world easily, and I worried that I couldn’t write another book on a timeline (tick tock). One day when my piano was being tuned, the tuner and I were discussing my situation. She said, “Maybe you only have one book in you.” That really got into my head. Maybe I did only have one book in me.
But the fear that hindered also saved me. I didn’t want to be a failure, or be in breach of my contract. I sat myself down every day and tried to write even when the words came slowly. I kept a meter of my progress on a sticky note and took a great amount of joy in watching the thick black line I made at the end of each day wander closer to the right-hand side of the note, where “90k” marked the end of the book.
The draft I turned in was a flawed one, but I did turn in a draft. Once you have something, even if it’s not your best work, you can make something better of it. I received editorial notes, and went to work. Then my editor (who was my third editor) left, and I was assigned a fourth editor and some new notes. I again revised the story. And though some of the notes from my new editor—who became my final editor—made me gnash my teeth in frustration and bewilderment because I could not imagine a way around the issues she outlined, they were ultimately what vaulted the story (and me) to the next level.
I did at times think the book was trying to kill me, though.
3. Like your first book, The Moon Sisters is the story of two sisters. This seems to be a common theme in your works. Why do you think this theme calls to you?
I have two sisters, and our relationships are complex and seem to find their way into my stories without conscious thought. For example, TLWoML is about the trauma of one sister following the loss of her twin at the age of sixteen. It was very late in the drafting process when I realized that I had borrowed the core trauma from a family issue: the loss of my father when my youngest sister was sixteen, and her battle to find “a way back.”
The Moon Sisters is also about loss, but over the death of a parent, and explores the very different responses and coping mechanisms of siblings Jazz and Olivia Moon. Though Jazz and Olivia are not based upon my real-life sisters, there are similarities; I think my subconscious mind pulls a lot from our family history as I write. But also: Sisters offer a lot of fodder for fiction.

4. How are Olivia and Jazz in The Moon Sisters different from Moira and Maeve in your first book? How are they similar?
They’re so different that I have a hard time comparing them at all. Forget apples to oranges; this would be like comparing apples to sneakers.
Olivia is a synesthete—she can see sound and smell sights—and has a whimsical way of viewing the world. Jazz is her opposite; she’s a realist with a huge chip on her shoulder. They are each, in their own way, lost.
That last line would be how all of the sisters are like one another: Maeve and Moira and Jazz and Olivia are all lost—though none of them are lost causes.
5. The keris, a Javanese dagger, brings a mysterious, spiritual, and maybe even supernatural element to your first book. Will we see any similar element in The Moon Sisters(and if so, is it linked to an intriguing item like the keris?)
Olivia’s synesthesia is the element my editor dubbed “almost magical realism” in The Moon Sisters.The way Olivia sees the world (and smells it, and hears it) is unique, and it plays an important role in the story both thematically (there are two ways to look at things) and in other ways. I don’t want to give too much away!
6. Both your books are published by Random House, although under different imprints. How did this come about?
Good question; you are really paying attention! The Shaye Areheart imprint of Random House closed shortly after my debut was released. My two-book deal transferred to Crown, also an imprint of Random House. This also relates to my answer on an earlier question, and partially explains how I had four different editors as I wrote The Moon Sisters.
7. You are also one of the co-founder of Writer Unboxed, an award-winning website. How did you become involved in the creation of this site? What do you think is the secret to its success?
We just celebrated our eighth anniversary at Writer Unboxed, actually. The site began when a friend of mine, Kathleen Bolton, asked if I’d like to start a blog. I crazily said yes. Over the last eight years, the site has morphed into what it is today—filled with wonderful authors and industry experts who are willing to share what they know about the craft and business of fiction. I think the site has become a success because we have such giving, gifted contributors, and that we’ve allowed it to grow into what it really wanted to become—a true community site.
Many thanks to Therese for being with us today! I look forward to reading The Moon Sisters!
The Moon Sisters on Amazon
The Last Will and Testament of Moira Leahy on Amazon