The Atomic Weight of Secrets: An Interview with Eden Unger Bowditch 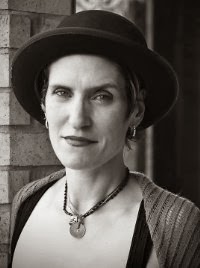 Over my Thanksgiving break, I planned to do a ton of writing and revising. What I did instead was get sick and stare blankly at my laptop in a miserable stupor. Eventually, I gave up, opened my Kindle and started reading a free sample of The Atomic Weight of Secrets, by fellow Project Mayhem-er Eden Unger Bowditch. Not only did I quickly forget I was feeling sick, I promptly downloaded the full book, devoured it, then contacted Eden about an interview.
Eden’s book – an alternate history, steampunkish version of The Mysterious Benedict Society – is a wonderful middle grade adventure. The full title is The Atomic Weight of Secrets or The Arrival of the Mysterious Men in Black (Book 1 in The Young Inventors Guild series), and as it just so happens, the second book in the series, The Ravens of Solemano or The Order of the Mysterious Men in Black, released just this fall.

A synopsis for The Atomic Weight of Secrets:
In 1903, five truly brilliant young inventors, the children of the world’s most important scientists, went about their lives and their work as they always had. But all that changed the day the men in black arrived.
Gathered from all across the world, the children are taken to a beautiful but isolated schoolhouse in Dayton, Ohio, without a word from their parents as to why. Not even the wonderful schoolteacher they find there, Miss Brett, can explain it. She can give them love and care, but she can t give them answers.
How is it all the children have been taught the same bizarre poem and yet no other rhymes or stories their entire lives? And why haven’t their parents tried to contact them?
Whatever the reasons, the situation is clear: The children and their parents have been kidnapped by these terrible men in black, and the only way they’re going to escape and rescue their parents is by completing the invention they didn’t even know they were all working on an invention that will change the world forever.
1. Eden, what was your inspiration for The Young Inventors Guild? I’ve always loved science and invention. When my eldest was reading the Harry Potter books, he (and we) LOVED them but he felt disappointed that magic wasn’t real. To me, magic IS real! Science and invention are a different kind of magic. The Young Inventors Guild characters appeared. They were there, in 1903, an incredible time of invention. So I let them create the scene and I told the story.
2. Tell us the story of your journey to publication. It was a completely sideways adventure. When people ask me about getting published I have to admit I’m the last person to ask since nothing was normal about it. First, I did speak to a couple people in the publishing world about it. Everyone said that I really needed some brooms and magic wands if I wanted to get it published. This was certainly discouraging so I just retreated and began to write. Second, I was living in Cairo and a friend of mine, author Jonathan Scott Fuqua, read what was then the outline/bones of the first Young Inventors Guild book I had been writing. He asked if he could show it to his publisher, Bancroft Press. He did and about four hours later they called him to say they wanted a meeting. Since I was coming back to the US in a few weeks, we made a date and they made an offer. I worked with a wonderful editor and The Atomic Weight of Secrets… was born. It was slated to be released on the Ides of March (15 March) 2011 which was right in the middle of the Egyptian Revolution. When The Ravens of Solemano… was slated for 13 September, 2013, my publisher actually changed the date when they realized it was Friday the 13th!
3. How many books are planned for the series? What can you tell us about them? I am presently writing the third book. It will take place mostly in Cairo. It is in the third book that we truly understand the mysterious men in black and why they are that way. We find out the reasons for all the secrets. The third book is to be called The Strange, Round, Bird…The plan is for a trilogy. 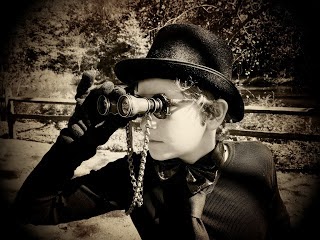 4. Each of the children in the Young Inventors Guild has a unique backstory. Do you have a favorite among them? Was there any one character who gave you difficulty or didn’t come out the way you expected? That is hard to say- a favorite child? Goodness!! Each child, as you say, is so different. It’s funny, though, because I’ve had a few readers who were fathers of strong and stubborn girls. Without exception, they have always noted Faye as the favorite character. Mother’s of awkward, talented, funny sons choose Noah. Little sisters select Jasper who is a wonderful big brother- and I had one of those. Each of the characters is special to me and I have great affection for the kids and Miss Brett. That said, both Wallace and Faye have broken my heart. It is hard to watch a character suffer. Wallace is so fragile I have sat writing with tears coming down. And Faye, well, I wish she would just be nicer. And, hopefully, she will. But her nature is what it is and I cannot make her be someone she is not.

5. I was startled when historical characters appeared in the book, although afterwards I chastised myself for not seeing that little twist coming. Can we expect more cameos by famous people later in the series? Absolutely. In The Ravens of Solemano… you will find one of my favorite inventors of the age!
6. Tell us a little about life in Cairo! The best of it — and the more challenging aspects of it. The people of Egypt are warm and kind and inviting. It is an ancient land with ancient customs and much has not changed in generations. The food is lovely and there is so much magic and history. We were all excited about the revolution, but it is not a simple thing. It was scary having tanks in front of the house and having to blockade the doors. But the patience and work required to make the country better has taken most people by surprise. It is hard to see a country of people who struggle to make their country function. Having freedom in government demands great responsibility and freedom is not something most Egyptian people understand since they simply have not had it. Caring for their own antiquities, keeping the streets clean, being healthy…these are all struggles. But Egypt is a place that will forever be in my heart.
Eden, thanks so much for visiting here today! Good luck with your series! And blog readers, this is a book I can highly recommend. You can check out Eden’s website or on Facebook and find The Young Inventors Guild series at your favorite book sellers!