I am picking up the interview with Susan Kaye Quinn just where I left off on Monday. We are discussing her science fiction serial, THE DEBT COLLECTOR:

“What’s your life worth on the open market? A debt collector can tell you precisely.”
3.  I understand the series has caught the attention of real life debt collectors. How did this happen, and what has been their response?
The vast interconnectedness of the internet means there’s nowhere to hide. Especially not from Debt Collectors. Ha! I have no idea how they find me, but “debt collector” must have awesome Search Engine Optimization, because they keep popping up. The coolest so far is a real live debt collector – who is also a reviewer for Suspense Magazine – who was interested in reviewing the story. I also spent a half hour interviewing him, comparing the lives of my futuristic debt collectors to his real-life experiences. It was hilarious and scary at the same time.
4.  The cover images are stunning. How are they created?

I struggled a LOT with the concept for the covers. I wanted to convey the future-noir feeling of the series, have each cover be unique yet still branded across the series, and they had to be WOW to go with the premise. And not break the bank, because I’m selling the episodes for only 99cents and each needs its own cover! I finally stumbled on a treasure trove of black and white stock art that really set the mood. My cover designer Steven Novak took those images and made them awesome. I’m having great fun finding images that fit each episode, and readers are telling me they not only are drawn in to the covers initially (which is the covers’ main job), but also that they feel the covers fit after they read the story. Win and win.
5. You’ve set yourself a dizzying pace for publishing each installment. It’s as if we really have returned to the time of the “serials” when authors would have magazine or newspaper deadlines to meet. Does this essentially produce a different reading experience than a novel that might simmer for months, endure several rounds of revisions, and — in the traditional industry — be filtered through several layers of editors?
Different reading experience, as well as writing experience.
For reading, I think the whole season, read together, will have the immersion experience of a novel. It will actually be a lot longer than a standard novel, more like three short novels put together. But the reading-as-we-go experience is where it’s different. So far, readers are telling me they’re enjoying each episode, it’s killing them that the next one isn’t here yet, and they’ve never tried a serial before, but they are enjoying it more than they thought they would. All good. And for readers who want the whole thing, it will eventually be bundled.
For writing, this goes back to the fan-driven art I was talking about before. I’m only half-way through writing the first season and I’m already making (small) changes due to fan feedback. One reveal I was planning on making later in the serial, I moved up because a reviewer mentioned she was wondering about it. And I’m giving one character a little more air time in a future episode because readers are enthused about them.
I still have critique partners (including you!) who read each episode, and I’m writing the series in sets of three (with the three-episode clusters more tightly tied together), but the time scale is definitely much shorter than anything you could do in the traditional industry (unless you pre-wrote everything, which eliminates fan feedback). I honestly don’t think that’s a bad thing. Simmering and layers of editors are fine, but simmering can also let a story go flat and too many cooks in the kitchen can spoil the broth (I’m sure there’s another cliché I could throw in, but I’ll stop there). I think the resonance a story has with readers comes somewhat from the inspiration the writer has while creating it. Sometimes (not always) you have to strike while the iron is hot (I knew I could find another cliché). Not all stories come out this way, but some do, and they can come out well without tremendous amounts of editing, assuming the writer knows what they’re doing.
To be honest, I couldn’t write this way if this was my first story, or even my first series. I had to polish up my skills as a writer before I could attempt something like this. That being said, this is the toughest writing I’ve ever loved. 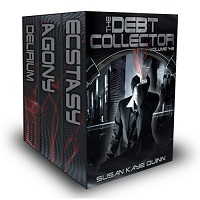 6. So, when can we expect a film agent to jump on this premise and pitch it as a television series?
Any day now, I’m sure! 😀 I think this story oozes with possibility as a TV series or even a big screen adaptation. Or a graphic novel! Whoa. I can so see this in black and white glossy noir graphic art. But if it’s never anything more than an ebook serial that keeps readers begging for the next episode, I’ll be more than happy. When the Muse popped this story into my head during that long car ride, I literally had to pull over and start writing. For me, it’s all about getting the story out into the world. Whatever happens from there is just a bonus hit of life energy on top of the normal buzz I get from creating the story in the first place.

Susan, thanks so much for talking about your new series and this exciting new time for readers and writers. A copy of Episode 1: DELIRIUM is up for grabs! Don’t forget to enter:
a Rafflecopter giveaway