The Essence and Work Ethic of Blue Collar America: A Chat with Susan Flett Swiderski 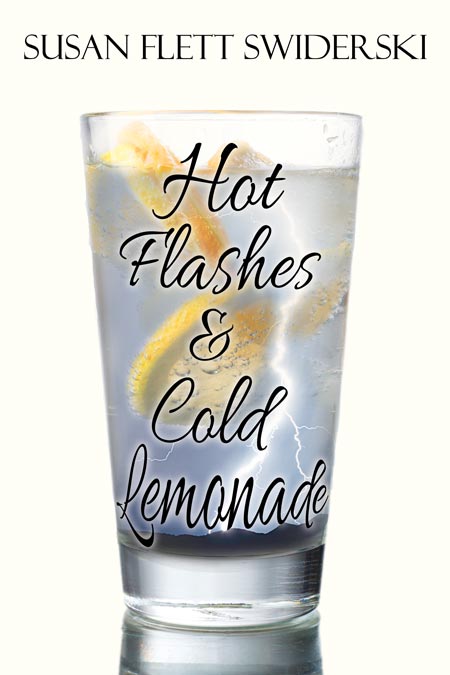 I’ve been following Susan Flett Swiderski’s blog, I Think; Therefore I Yam, for a long time, and Sue was one of the early participants in my First Impressions series, sharing her first page of HOT FLASHES AND COLD LEMONADE, which she has now published. Sue has been a great supporter of my books, and I’m thrilled to have her here today, talking about hers!

Living the perfect life has always been easy peasy for Pearl Bryzinski, because she’s practically a pro at ignoring the negative and putting a positive spin on the facts, but it’s impossible for her to find anything positive about Daddy skipping town with that blue-haired floozy in a flashy brown Pinto. No matter how hard she tries, she can’t ignore the fact that he’s gone… or the fact that she’s becoming a drama queen who can sweat like a sumo wrestler doing push-ups in a sauna. It’s almost enough to suck the blush out of her rose-colored glasses. Whether she likes it or not, she’s gonna have to turn some of her wishbone into backbone.
Layer by layer, assumptions and misconceptions peel away, as Pearl learns to buck up in the face of reality, and to laugh at her imperfect… but not so bad… life. Supported by a down-to-earth husband who loves her with every blue-collar bone in his body, a mother who isn’t the self-centered witch Pearl imagined her to be, three terrific grown kids… okay, make that two terrific kids, and a Golden Boy who’s a far cry from 24-carat… and a bunch of wonderful wacky gal pals, Pearl comes to realize that her mixed bag of family and friends makes her life damned near perfect. Pearl being Pearl, she’ll never give up her rosy specs entirely, but learning to handle reality also means learning to deal with death.
1. What was the inspiration for HOT FLASHES AND COLD LEMONADE?
Miss Brown, my second grade teacher, told me I was gonna be a published author some day, and by golly, I believed her. (Okay, so maybe I was a little slow to embrace my destiny, but better late than never, right?) My mother and her sisters inspired me, too, and I tried to capture some of their wonderful wackiness in my book.
2. How long have you been working on this book, and what transformations has it seen along the way?
I finished the first draft in the early to mid ‘90s, and then the manuscript sat in a box at the back of my closet for almost a decade. Good thing I had it in that box, too, because the original was typed on an Apple IIE. (Oops!) I had to scan the whole darned thing into my P.C. in order to get back at it.
The evolution from that first draft to its final (billionth?) is pretty startling. Pearl became less ditzy, and her husband George, more likeable. Another character turned gay, and another became even more of an SOB. My writing style underwent some mutations, too, and went from being more literary (and kinda stiff) to more easy-going and readable. I also became more cognizant of that ol’ show, don’t tell mantra, and lost a lot of adverbs and flowery descriptions.
3. I know the story takes place in Baltimore, where you grew up. What parts of Baltimore did you most want to capture in your book?

A lot of the local landmarks are included to give an authentic feel to the setting, but what I most wanted to capture is the essence and work ethic of blue collar America. I see a certain heroism in the people who work hard year after year at thankless jobs they hate, just so they can provide for their families. That’s as true in Pittsburgh and Detroit as it is in Baltimore.
4. Are any of the characters based on people you know? (Do you think they’ll recognize themselves?) Which character is most like YOU?
Um, of course not! Okay, so maybe a teensy bit. I mean, don’t you think it’s inevitable for certain facets of the people who make the biggest impressions on us in real life to be incorporated into the characters we create? One of the highest compliments a reader can give a writer is to say, “I could see myself… or my friend, aunt, grandmother, son, etc…  in your story.”  The more easily readers can project themselves and the people they know into our story, the better they’ll relate, and the more they’ll enjoy it. Without a doubt, Pearl is like me in many ways, and I hope most female readers will see themselves in her, too.
5. Would you like to share anything about your journey to publication and why you chose the self-publishing route?
I went through the traditional query-synopsis-edit-reject-repeat meat grinder for a while, but the bottom line is, I’m not a spring chicken. I wanted to stop fooling around with it, and get my book out into the world before I stopped breathing and rigor mortis set in.
6. What else would you like to tell us about HOT FLASHES AND COLD LEMONADE?
Its target audience is female, but I’ve been pleasantly surprised (No, make that astounded!) at the positive reactions I’ve been getting from male readers, as well. (And guess what? Only one of them sleeps with me!)
Thanks, Dianne. It’s been a blast.
Susan, thank you! HOT FLASHES AND COLD LEMONADE is available through Amazon.