The Princess and the Pea Meets Organized Crime

I met Tiffany Schmidt a few years back because she’s an author in the Philadelphia area, like I am, and sometimes we end up at the same events. When we run into each other, we catch up on our respective families and writing careers. It wasn’t that long ago that I recall asking her: “What are you working on now?”

And she said: “A modern re-telling of The Princess and the Pea with illegal organ trafficking.”

Needless to say, I’ve been anxiously awaiting Hold Me Like a Breath: Once Upon a Crime Family ever since that day. I bought the book as soon as it released, and even before I finished it, I was raving about it on Twitter and chasing down Tiffany for an interview. She graciously agreed!

Before the interview, however, let me share a synopsis for the book:

In Penelope Landlow’s world, almost anything can be bought or sold. She’s the daughter of one of the three crime families controlling the black market for organ transplants. Because of an autoimmune disorder that causes her to bruise easily, Penny is considered too “delicate” to handle the family business, or even to step foot outside their estate.

All Penelope has ever wanted is independence-until she’s suddenly thrust into the dangerous world all alone, forced to stay one step ahead of her family’s enemies. As she struggles to survive the power plays of rival crime families, she learns dreams come with casualties, betrayal hurts worse than bruises, and there’s nothing she won’t risk for the people she loves.

1. Tiffany, thanks for joining me here today. The first thing I want to know is: Why did you choose The Princess and the Pea as the basic building block of this story?

I’ve been fascinated by the fairy tale The Princess and the Pea since I was really young. Not so much about by the story Hans Christian Andersen wrote, but by the details he didn’t include. I used to accuse my parents of skipping pages or leaving out the best parts, because I didn’t believe there weren’t any answers to WHY the princess was alone at night in the middle of a thunderstorm, or WHY it was appealing that she bruised.

I was a spectacularly accident prone child and spent far to much of my childhood in stitches and casts—I had plenty of experiences with bruises. They hurt. The fact that the prince’s family essentially celebrated the princess’s bruise—and this meant they could marry—this confused and concerned me as a kiddo. And it was something I never stopped thinking about. All these years later, Hold Me Like a Breath is my answer to those childhood questions. It’s a narrative I wrote to wrap around the spaces in the original fairy tale.

2. Tell us about Penelope’s disorder: Idiopathic thrombocytopenic purpura. In layman’s terms what is wrong with Penelope’s body?

Penny has an autoimmune condition called Immune Thrombocytopenia or Idiopathic thrombocytopenic purpura – it’s usually abbreviated to ITP. Basically, her body destroys its own platelets – and when her counts are low, this results in her bruising and bleeding quite easily. ITP manifests differently in every patient—this was one of the challenges in researching it for this book. There are so many ways to treat this disorder, so many different ways it can present in people. Every patient and doctor I spoke with described such a different experience with ITP.

Penny’s diagnosis is further complicated by the fact that she’s the daughter of the head of a crime family. While she has so much privilege and round the clock access to top notch doctors and medical care—she’s also trapped by her parents’ reactions to her disorder. Or, over-reaction is a much more accurate word.  Essentially, they assign Penny the role of pampered spectator—and expect her to live her life safely on the sidelines.

Unsurprisingly, she’s not a fan of their suffocating restrictions.

3. I see how this condition connects to the over-delicate princess in the original fairy tale. What made you decide to give Penelope a family engaged in illegal organ trafficking?

Deciding to swap royal families for crime families was a really fun decision. I knew that I wanted to tell a modern story with a contemporary feel, but I wanted to stay true to this idea of families that felt above the law—trading crowns for criminals was the perfect solution.

As for the decision to create crime families that trafficked human organs—that was a bit more complex. I was looking for something with moral ambiguity. I wanted the Families to create both harm and good. I wanted Penny to be able to view the Family Business with naïve, rose-colored glasses until she’s forced to refocus and realize that there’s a much darker side to the industry too.

Also, the juxtaposition of her Family being able to fix so many OTHER people but not cure Penelope, was a friction that was too delicious to resist. Especially when by curing other people and participating in this illegal industry, they only make Penny’s world more dangerous. 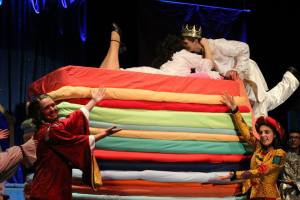 Can’t resist including this picture. My daughter recently played the jester in Once Upon a Mattress, Broadway’s version of The Princess and the Pea.

4. What’s next for you? Do you have future stories in mind for Once Upon a Crime Family?

I’m currently working on copyedits for the next book in the Once Upon a Crime Family series. Book two is titled Break Me Like a Promise and is told from the point of view of Magnolia Grace, who is the take-no-prisoners, sass-for-days daughter of a rival crime family. I’m really looking forward to sharing the next step in the series arc and introducing readers to Maggie Grace!

Having briefly encountered Maggie Grace in Hold Me Like a Breath, I can’t wait to see more of her! You can learn more about Tiffany — as well as her previous books, Send Me a Sign and Bright Before Sunrise at her website.