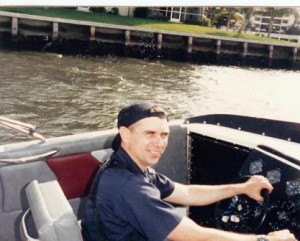 Our final selection for April’s First Impressions is from someone I know personally – Larry O’Donnell, who doesn’t have a blog of his own (yet) but sometimes does guest posts for me. Larry’s manuscript is an action thriller, loosely based on his own experiences as a Customs Officer in Florida during the 1980’s.

On page 1 we meet the antagonist:

Paco Rivera-Guerrero paced back and forth on the dock. He looked down into the engine compartment of his 37-foot vessel for about the hundredth time since 0100. The boat was a re-built Midnight Express, designed to meet the needs of smugglers. One of his engines was still disassembled and the Bahamian mechanic did not seem to grasp the urgency of the situation. As the mechanic reached up for his fourth beer since two o’clock, Paco lost some of his patience. He kicked the can into the water and locked eyes with the mechanic. 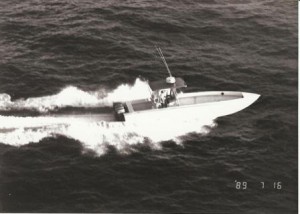 The mechanic said, “Yo mon, get me another beer, or I’ll be walkin’.”

“If you don’t have that engine running in thirty minutes, you’ll be floating.” To punctuate his statement, Paco drew a .45 caliber pistol and pointed at the mechanic.

“You get in big trouble here, having a gun,” the mechanic mumbled.

“I’ll risk it. You have twenty-nine minutes. If I have to find another mechanic and miss my schedule, you die.” He added, “I have a special relationship with the police.”

The mechanic, with much greater motivation, turned back to his task.

Having been to the Bahamas, I appreciate Paco’s frustration. There is no sense of hurry there! Like many other works in this genre, we won’t meet the hero of this story until later, after disaster occurs and he’s called in to help. Instead, Larry’s manuscript starts with the initiating event of the story – armed drug smugglers running cocaine into the U.S. with a malfunctioning boat. I think that’s an effective way to begin a novel in this genre.

Ten minutes passed before the third crewman walked up to the boat. Like Paco, Jorge Romero was a Cuban who found the cocaine smuggling business a far better alternative to his prior career as a soldier and then a dishwasher in the Workers’ Paradise. Paco had been in a Cuban Army Special Forces unit until the General recruited him to manage his drug running sideline. Romero asked, “Is Ezzy ready for the trip?”

Paco smiled at the nickname and with mock dignity said, “Esmeralda is always ready, so long as she is treated right. It is just another routine ride to Florida. She’s made this run more times than the Viking Princess.”

I like the tone of the narration – that little bit of sarcasm slipped in so subtly: his prior career as a soldier and then a dishwasher in the Workers’ Paradise. Even the smugglers’ joking about the Viking Princess gives them a little personality beyond the “bad guy” image.

I would caution Larry to watch out for sentences that inform the reader of facts and background he wants to tell us. If you’re informing us, you’re pulling us out of the story. Instead weave this information into the narration. One sentence that bothered me was: The boat was a re-built Midnight Express, designed to meet the needs of smugglers. That information could be conveyed some other way: He looked down into the engine compartment of his 37-foot, modified Midnight Express for about the hundredth time since 0100. The sentence describing Paco’s military background is another one that breaks the narration. Try sharing that information with us in a way that would be natural for Paco to think about – give it to us through his eyes, as part of his experience in the story. When Paco meets with the General (as I know he does later in the story), that would be a more natural time to reveal their shared history.

Be sure to hop over to Marcy Hatch’s blog Mainewords to read her critique of Larry’s piece. We’ll be back next month with 3 more first page crits – one spot is still open! See the sidebar for more information!