A Tourist in Mexico 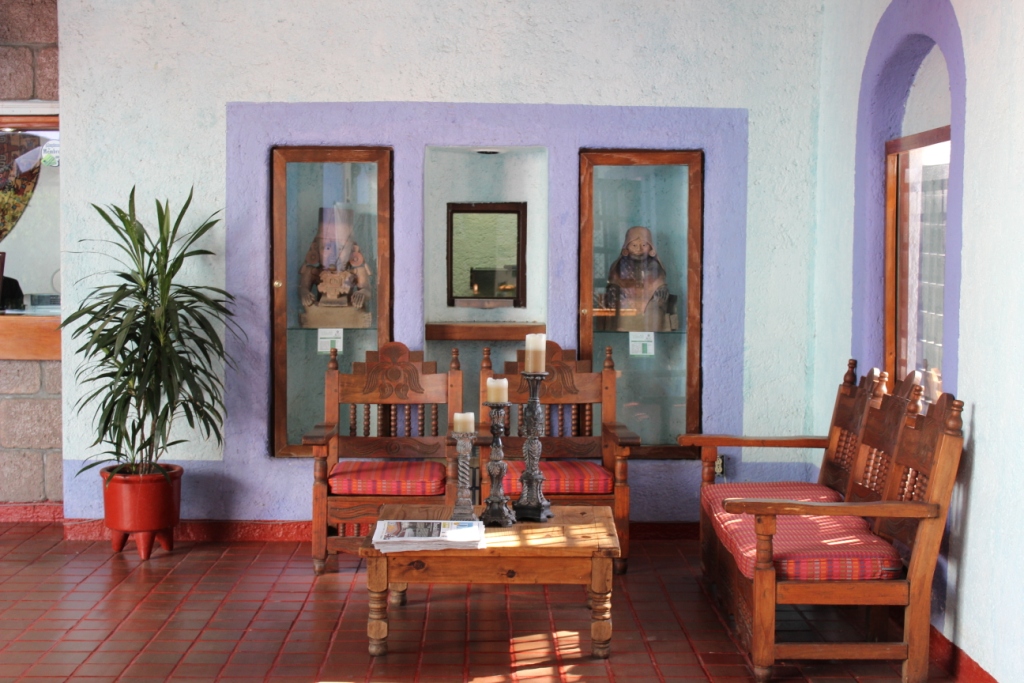 This is the last post about Mexico – I promise!  But I’ve told you what the trip did for me as a writer, I marveled at the history, and now I just want to share a few tourist-y things.
The Mexican people were warm and friendly and welcoming. I speak no Spanish, and the workers at the hotel in Teotihuacan spoke almost no English.  It didn’t matter. They were kind and patient, and we found a way to communicate. Nobody rolled their eyes at me; nobody was impatient. (And I’m sorry to say, I’ve seen Americans do that to people who don’t speak English – lots of times.)
We loved the hotel, Villas Arqueologicas Teotihuacan, and Journeys Beyond the Surface, the tour company that helped us plan our trip and provided us with guides.  The charming Sergio picked us up at the airport and drove us to Teotihuacan, and we enjoyed his company so much, we booked him for the trip back to Mexico City and then to the airport a few days later.  On the site of Teotihuacan, we were escorted by Alvaro, a sculptor and university professor – and also charming company.  Upon our return to Mexico City, we also had the opportunity to meet the owner of the tour company, Mojdeh, and ended up inviting her out to dinner with us.
In Mexico City, we visited the National Museum of Anthropology and discovered admission that day was free, thanks to a group of historians and archaeologists who were protesting the treatment of ancient historical sites.  They paid for everyone’s admission to raise awareness of the damage done to priceless artifacts in the name of tourism – including guide-rails drilled into The Pyramid of the Sun and a sound-and-light stage constructed for an Elton John concert near Chichen Itza.  When we visited Teotihuacan, The Pyramid of the Moon was closed to tourists above the first level, and Alvaro predicted that someday The Pyramid of the Sun might be closed, too.  I’m of two minds about this, because of course I want to see these places preserved, but climbing that pyramid was the whole reason for my trip.  I can only say that I’m glad I had the opportunity to do it while it’s still possible.
And finally, a big FAIL for Verizon Wireless. Before we left home, we bought a global data package so I could use my Droid 4 on the trip. But we weren’t in Mexico 30 minutes before I started receiving dire texts from Verizon, warning me about data charges that spiraled higher and higher at a ridiculous rate.  A call to Verizon confirmed our global plan package, but the representative said it was impossible to turn off the automatic texts.   So, I had to put up with annoying (and worrying) messages throughout the trip. Whether Verizon will actually try to stick us with the final outrageous bill ($2000) remains to be seen. The guy on the phone said “no” – but we’ll see.