Looking Back as I Near the Finish Line 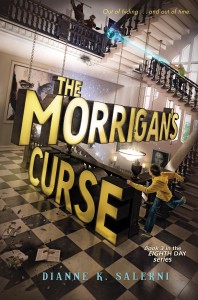 I have never been a runner, but I am guessing that as runners near the finish line of a race, they don’t look back to see how far they’ve come. They have their eye on the goal. But as a writer, I often find it instructive to look back at my process. This month, I’ve been working on a second round of revisions for The Morrigan’s Curse with my editor. Yes, there will still be copy-editing and proof-reading to do, but for all intents and purposes, I am approaching the finish line for this book.

Looking back through my files, I saw that I started the first draft of this book (originally titled THE GIRL OF CROWS) in November of 2013. That’s right. 2013 — before the first book in the series, The Eighth Day, was even published and out on the shelves. This is something I posted at Project Middle Grade Mayhem back when I was just about to get started:

Dianne: Hello, team! Glad to have you all back for Book 3 in this series – and to the new characters, welcome. I assume you’ve seen the proposed outline for the next book, and you know I’m not very good with outlines. But after two books, we’re used to working together, so I figure you’ll know where I’m going astray.

Jax: Well, there’s something majorly wrong with the climax. In the first book, we saved the world. I mean, the Villain was “this close” to succeeding. And in the second book, you went for more personal stakes. I mean, there was plenty of exciting stuff … my identity was in question, and Riley and Evangeline’s lives were in danger …

Riley: Yeah, he’s right. Personal stakes were fine for Book 2, but in Book 3, we’ve got to get back to saving the world.

Dianne: But the New Villain has a pretty evil plan …

Evangeline: And, according to this outline, we stop him while he’s still three or four steps away from succeeding at it. That’s not very scary.

Dianne: I see your point.

New Character (Name Withheld): If you let the New Villain take things further, he’s going to have to involve me. I’m going to have to make up my mind which side I’m on. Won’t that solve the problem you’re having with my character arc?

New Villain: I object to my cartoonish nature. You did everything but give me a cape to swoop and a mustache to twirl. Can’t you provide me with some depth?

Dianne: Not in the outline, buster. You’re going to have to develop your personality on the page, just like everybody else here.

Riley: Yeah. You should have seen how she had me planned in her outline for Book 1. But I set her straight by the end of the first draft.

Secondary Character (Name Withheld, but maybe you can guess): Hey, I have a complaint. I don’t even show up until the middle of the book. I was beginning to think I didn’t have a part!

Dianne: We couldn’t have a story without you! Readers simultaneously love you and want to strangle you.

Secondary Character: But after you bring me in, I’ve got nothing to do. I don’t even see my name mentioned in the climax!

Dianne: I didn’t know how I was going to use you in the climax of Book 1, but I brought you along for the ride – and when the time came, I discovered your purpose. Trust me. You’re my wild card. When it’s time to use you, I’ll know.

Dianne: It’s the third book. There should be casualties. We can’t just kill off bad guys and lose none of our own. What do you think this is, the Twilight series?

Secondary Character 2: But why me? Do you know how many times I’ve saved your heroes or bailed them out of trouble?

Dianne: That’s kind of why you have to go.

Riley: Don’t kill this person off for the sake of our character arcs. None of us want to take the rap for that!

Jax: I don’t think it’s fair for you to kill anyone as a cheap emotional trick.

Secondary Character 2: I don’t want to be the All is Lost Moment!

Dianne: I wouldn’t waste you like that. If you go, it will be a Turning Point – a Courageous Sacrifice for your friends. Otherwise, I won’t do it. Deal?

Secondary Character 2: All right. Either I go out in a Blaze of Glory – or I survive. Deal.

Jax: Hey, the ending scene is perfect.  Good job there.

Dianne: That’s what we’re working toward, then. That ending. Okay, folks. Let me mull over the World Stakes Climax, and we’ll meet back here for Chapter 1 in a couple days. We can do this. Right?

Looking back on this is pretty funny to me now. I don’t remember all this uncertainty! I can’t even remember what the original climax was supposed to be — the one that wasn’t very good because the villain never got close to succeeding. I’m really proud of the one I wrote instead. As for the fate of Secondary Character 2 … I’m not going to reveal it here. Everything became clear as I wrote the story. There are casualties. But they may not be the ones I was originally considering.

This is why, for me, outlining is never as useful as actually writing that first draft. Painful as it is, it’s the only way I can figure everything out. And that’s always helpful for me to remember when I’m in the agonizing throes of drafting.

How often do you look back at your process? Do you ever find little gems like this post that remind you how far you’ve come?