This Saturday was the second annual Bring More YA to PA Book festival (also known as PAYA), held in West Chester, PA and squeaking in just ahead of Hurricane Irene. Sadly, a number of authors had to cancel due to the weather-related difficulties, and some of the attendees didn’t make it either. But I was thrilled we weren’t forced to cancel altogether. (And actually, the smaller crowd made it possible to have more conversations with people.) Kudos to Skyanne for another wonderful event benefiting Pennsylvania libraries!

There were raffles of books and swag. 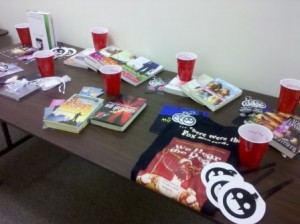 There was a goldmine of donated books for PA librarians to take (free of charge!) back to their libraries. 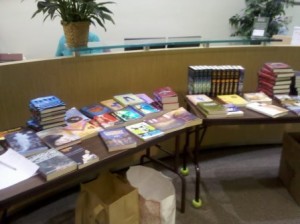 And of course, there were lots of YA authors signing their books. I enjoyed seeing April Lindner and Josh Berk again. (We met at the Drexel University event back in May.) There were authors back from last year, like Shannon Delany. And I had the pleasure of meeting Susan Shaw, Leah Clifford, Charlotte Bennardo, and Natalie Zaman – plus K.M. Walton whose book Cracked comes out in January of 2012. (She and I had only met electronically before!) 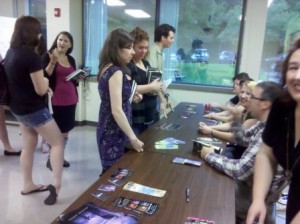 I walked away with signed copies of Sirenz by Charlotte Bennardo and Natalie Zaman and The Dark Days of Hamburger Halpin by Josh Berk. (But there are plenty more titles in my head I plan to check out on my Kindle.)

By the time I left the event, it was raining – but just a normal kind of rain. Plenty of time to get home, kick back with one of my new books, and wait for the storm to roll in!

As for Irene, her destruction was minimal in our area of southeastern Pennsylvania. No trees down in my yard, nothing broken or damaged. The power went out around 4am and was out for about 9 hours. We had a generator to power our refrigerators, so we viewed it mostly as an inconvenience and didn’t have to worry about our food.

The scariest moment of the whole storm for me was when I walked outside the basement door into our sheltered patio by the goldfish pond and nearly stepped on a 6 inch black snake. I know he was just a little fellow sheltering from the storm, but I screamed and nearly climbed straight up a brick wall! *shudder*

Hope all my friends in the Bloggerverse survived the storm as well as I did.