How Many Graves Does One Man Need? 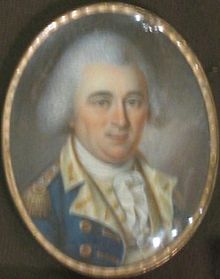 No, this isn’t a weird version of Bob Dylan’s Blowin’ in the Wind. This is a true story about how we treat our heroes here in Pennsylvania!

General Anthony Wayne is Pennsylvania’s greatest Revolutionary War hero. “Mad Anthony” once promised George Washington that he would “lay siege to Hell itself” if asked. After the American Revolution, Wayne continued to distinguish himself in the Indian Wars, particularly in the Battle of Fallen Timbers.

Wayne died near Erie, Pennsylvania in 1796 from complications of gout. He was buried there with all due honors, but thirteen years later, his son came retrieve his father’s body, wanting to re-bury him near the family home in Radnor, Pennsylvania. The old hero was exhumed, whereupon it was discovered that Wayne’s body was unnaturally preserved. The son had planned to take his father’s bones home with him in a cart, and yet there was a lot more of him left than bones – which presented (ahem) a logistical problem of transportation.

A local doctor was hired to resolve the problem by separating the flesh from the bones. Butcher knives were used at first, but eventually they resorted to boiling Wayne’s bones to clean them entirely. The flesh and the remains of the stew pot (eeeww!) were re-buried in the original grave. Wayne’s son departed with his father’s bones in a box.

According to legend, the box with the bones fell out of the cart several times on the journey home (What kind of bumbling idiot was this son?), but eventually some number of General Wayne’s bones were buried in Radnor. Anthony Wayne’s ghost may (or may not) haunt the diagonal path across the state, looking for the missing bones, but that’s another story.

Somehow, I find it fitting that in a state where you can’t buy beer and wine in the same store, you also can’t pay your respects to our most famous Revolutionary War hero in just one cemetery!