The Ticking Tomb of Landenberg 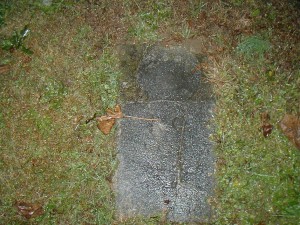 Anthony Wayne might have had the weirdest burial(s) in Pennsylvania, but there’s another strange grave in southern Chester County, PA, about 10 minutes from my house.

In the cemetery adjoining the London Tract Meeting House in Landenberg, there’s a marker for a grave known as The Ticking Tomb. It’s said that if you place your ear against the stone, you can hear the distinct ticking of a watch. The Ticking Tomb is an old, old legend. In fact, it’s believed that Edgar Allen Poe, while visiting the area, went to hear it for himself and was inspired to write The Tell-Tale Heart.

According to legend, in the mid 1760’s surveyors Charles Mason and Jeremiah Dixon were passing through the area while mapping out their famous Mason-Dixon line. A local tot supposedly swallowed Mason’s pocket watch, which continued to tick inside the boy throughout his life and beyond. (That’s some watch!)

As for the story that Poe visited the grave – it’s quite possible. In the early 1840’s, Poe stayed at the Deer Park Tavern in Newark, Delaware – the same place where Mason and Dixon stayed nearly a century earlier. He may very well have heard the legend of the ticking tomb at that time.

It is also said that Poe stumbled while getting out of a carriage at the Deer Park Tavern, and for this indignity, he placed a good-natured “curse” upon the place: Anybody who visited it was doomed to return, again and again. The curse is still in effect: The Deer Park was my college hangout when I attended The University of Delaware, and my family still goes there for dinner and brunch! Hard to believe that Edgar Allen Poe – not to mention Mason and Dixon – ate at the same establishment, but that’s just the awesome thing about history. Time marches on but stories last forever.