The Return of the Hound 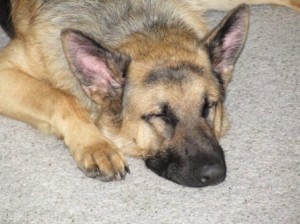 Last fall, my brother-in-law Larry did some dog-sitting for Sorcia and wrote a brilliant account of it in the style of Sir Arthur Conan Doyle. (The Hound of the Salernis). As noted by a few of my savvy readers (that’s you, Lenny), it was apparent that Larry and his wife were hankering after a hound of their own. And so it came to pass …

The Return of the Hound by Larry O’Donnell

As I looked through my dispatch box, securely held by my banker, I found this tale. Though formerly the world was not prepared for it, times have changed and, with due discretion, it may be told.

The first encounter with the hound ended happily enough. All the parties found their own way to deal with the Beast and it can be gainsaid that Beast herself accommodated humanity as well.

In my household this general tranquility was, perhaps, a thin veneer over the maelstrom that was my beloved wife. She was left unsatisfied by the brevity of that first encounter and the cats proved themselves inadequate solace to her. Commands to come, sit, down, or stay appeared to have no observed effect on the felines, although I swear I saw some response to the opposite of the command.

So it came to be that a purveyor of monstrous beasts, somehow knowing of my wife’s innermost desire, provided her a chance to meet and perhaps take possession of a similar creature. A family outing was organized and the Hound made our acquaintance. So reasonable were the terms of the purveyor, my wife immediately agreed to take possession, in spite of the lack of a coupon.

On the first night at home, in the hours of darkness where the powers of evil are exalted, the Hound exhibited those powers which cause mortal men to tremble. He roused me from sleep several times and went about claiming his territory. It was then that we first heard the Hound – his bark shook the house and caused neighbors’ pets to flee.

Since that time, the legend of the Hound grew beyond measure. Neighbors whispered of a spectral beast that wandered my estate. Peddlers gave my home wide berth, one having been scared witless after ringing our bell. The pitiful wreck of a man, reduced to mumblings of his sighting of the beast, was led away by his associates, never to be seen again.

When the Hound drank, he buried his face in the water and appeared to be possessed by demons. Water flew everywhere as he took in copious amounts through his terrifying maw. He used his snout as a battering ram, opening doors at will. He charged out the scullery door, oblivious to the closed screen door. The result was a destroyed door and the Hound gave me a puzzled look as if to ask, “Do you seriously believe such a flimsy barricade could restrain me?”

As time passed, the Hound won the affection of my family and, I daresay, myself. He proved himself stout of heart and a fierce protector of us all. I only wish he would not drag me from my bed during those hours of darkness when the night is blackest to wander the estate, seeking just the right spot to make his mark. These sojourns often last for a half hour. Nonetheless, the Hound continues to thrill and amuse us. I believe the legend grow ever larger, along with the Hound.

Bravo, Larry. For those of you wondering, the newest addition to the O’Donnell family is named Houston. (His pedigree papers have him saddled with the full name of Houston We Have a Problem.) 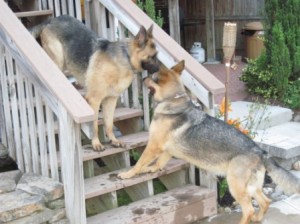