How to Raft Without Your Raft 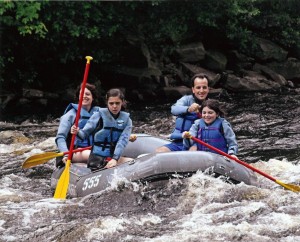 That’s a picture of the Salerni crew whitewater rafting on the Lehigh River in the Pennsylvania Pocono Mountains a couple weeks ago. Yes, we’re all having a great time, except possibly for Gabbey, who is clearly wondering, “WTH were my parents thinking???”

This picture was also taken before I was de-rafted.

As near as I can recall, I was yelling at my husband right before we hit the big rock, arguing with him about how to steer the darn raft. And the next thing I knew, I was in the air – and then in the water.

Didn’t seem like it would be too hard to grab the raft and climb back in – except that suddenly the raft and family were yards away, and I was floating on my back downstream next to a gentleman who had also abandoned his family involuntarily. “Uh, meet you on shore?” he said.

“Looks like it,” I replied. I figured we’d float to a calmer section of the river and swim over to the bank.

Then we hit more rocks.

I wasn’t alarmed until one of the rafts nearly ran me down. That’s when it occurred to me that I could actually get hurt. Enough of this, I thought. I’ll just climb up on one of these rocks and wait for someone to rescue me. Huh. Easier said than done.

Finally, a raft full of strapping, 20-something young men with Caribbean accents snagged their boat on a rock beside me and hauled me in like …(I won’t claim to be anything as graceful as a mermaid) … like a great big flounder.

Eventually, they steered me over to my family’s raft. Turns out my husband had managed to haul in the floating man. Afterwards, I mentioned to Bob that maybe I should have stayed with the nice-looking Caribbean guys, because they seemed to know what they were doing. And my husband replied that maybe he should have kept the fellow he found, because he paddled a lot stronger than I did.

Over a week later, I’m still black and blue. Nevertheless, I might be persuaded to go rafting again, sometime in the future — when the memory of this event is more humorous than humiliating! 😉