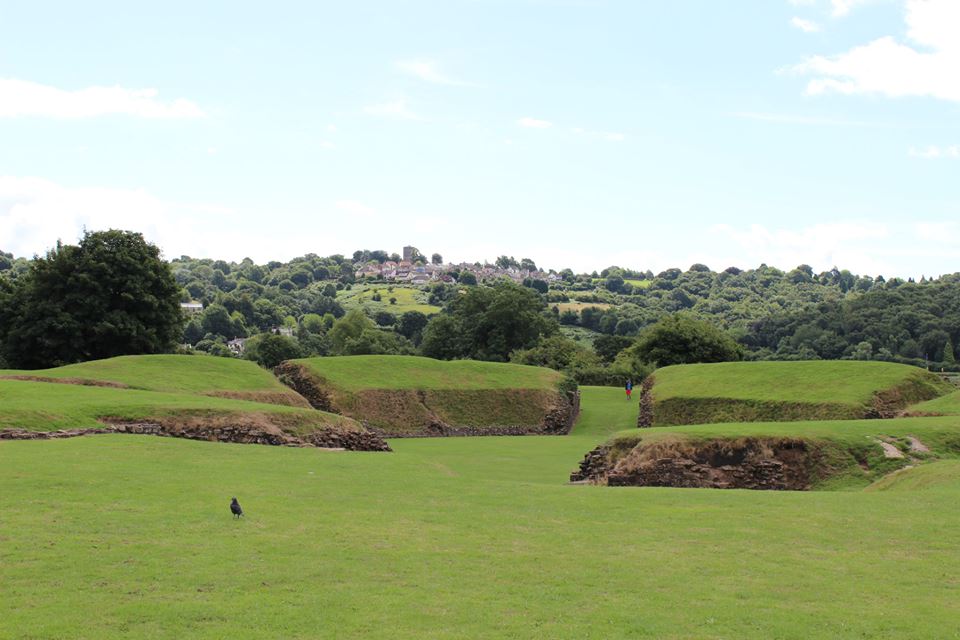 My upcoming book, THE EIGHTH DAY, has a tie to Arthurian legends – with, I hope, a unique spin on them – so I wanted to do research for the series while I was in Wales. During my visit, I found out that South Wales may truly be the origin of King Arthur, although not in the way I expected.
King Arthur would have lived in either the late 5th or early 6th centuries, if he was a real person. He was called “King of the Britons” – which meant he was ruler of an area that combined today’s Wales and England after the Romans left and during the time of the Anglo-Saxon invasion. In spite of fierce resistance, the Anglo-Saxons eventually overran the Britons. The land they conquered became known as England, and they called the original inhabitants “Welsh,” meaning foreigner. (Figures!) Some of the Britons fled and settled in a place that came to be known as Brittany (now part of France). Their descendants returned to England centuries later as part of the Norman invasion in 1066.

Our Welsh tour guide, Paul, took us first to Caerleon, the site of a Roman legionary fortress. This was one of the northernmost outposts of the Roman Empire, one made more palatable to the occupants by the building of an opulent Bath and an Amphitheater on the premises. The connection with Arthur stems from legends that he built Camelot near the ruins of this Roman fortress, or that he used some of the abandoned structures, including the amphitheater, for his own purposes. Geoffrey of Monmouth, the most prominent chronicler of Arthurian legend, specifically mentions “The City of Legions” in connection with Arthur. It’s also been suggested that the “Round Table” was no table at all, but actually this Roman amphitheater.

Of course, there is no proof of this.
Paul also took us to the ruins of Ogmore Castle. This was a Norman fortress and well beyond Arthur’s time. However, some historians believe that Arthur’s final battle – the one in which he was mortally wounded by Mordred – took place on the plain near Ogmore. The wounded Arthur was then transported by boat on Ogmore River toward the sea, where either he died and was buried in a cave or was placed under a sleep spell to wait until his country needs him again.
Of course, there is no proof of any of this, either.
We also visited Cardiff Castle. During the 12thcentury, this castle was home to Robert of Gloucester, illegitimate son of King Henry I. A frequent visitor to this castle was Geoffrey of Monmouth, the cleric who wrote several histories of Britain. Robert was one of Geoffrey’s sponsors and helped him rise to great heights in the church. Geoffrey, meanwhile, wrote histories that pleased Robert … including tales of King Arthur which glorified the Britons who defended the land 500 years earlier (and were coincidentally ancestors of the Normans). Geoffrey’s book catapulted King Arthur, King of the Britons, to world-wide fame. Writers contemporary with Geoffrey and those who came after used his book as the historical reference for their own, while Geoffrey claimed that his own historical reference came from a mysterious, nameless, lost book that was given to him but has never been seen since.
Sadly, there seems to be plenty proof of that part!
Our tour guide, Paul, recommended I read The Camelot Inquisition by John F. Wake. I promptly purchased it on Kindle and read it during my stay in Wales. Wake is a retired police officer who researched the historical existence of Arthur using the standard of a policeman gathering evidence to present before a court. It was very interesting reading, especially while I was visiting some of the sites mentioned.

Next week, I’ll share the details of what I learned, especially what, if any, reliable historical references can be found to Arthur prior to Geoffrey of Monmouth.