Huck Finn and the State of Being Uncomfortable 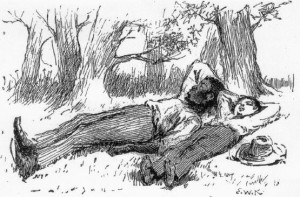 Seeing Huckleberry Finn on the list of banned books is no new thing. It’s been controversial for years and years, thanks to it making us uncomfortable and forcing us to think a little. (Wouldn’t Mark Twain have a laugh about that? I expect he’d write another satire about the whole situation.)

The imminent publication of an “expunged” version that removes the n-word from the text has made me ponder the dilemma of educators who want to teach this book, but can’t. That word is, of course, one of parents’ major objections to the novel – along with the stereotyped portrayal of certain characters. The word and the stereotypes make readers uncomfortable, and for heaven’s sake, we wouldn’t want to be uncomfortable while reading a book about racism, would we?

Mark Twain meant for us to be uncomfortable. He deliberately dug around in the ugliest aspects of his society to stir up trouble, to make his readers questions themselves and their attitudes. Does the story still have value to us today? Some people think not, because slavery is gone and we should put it behind us and forget it ever happened. But expunging history is just another way to deny those deep-rooted prejudices (against race, religion, sexual-orientation, political views) that still afflict our country. If you have any doubt that erasing history promotes specific agendas, check out what the School Board of Texas has done to their history curriculum.

It might be easier to teach Huck Finn without that word, but if you water-down the racist elements of the story, then you’ve trivialized the moment when that 12-year-old boy from the lowest element of society has to decide between helping his friend Jim escape slavery and condemning himself to hell (which is what he’s been taught happens to abolitionists).

I was a-trembling, because I’d got to decide, forever, betwixt two things, and I knowed it. I studied a minute, sort of holding my breath, and then says to myself:

It was awful thoughts and awful words, but they was said. And I let them stay said; and never thought no more about reforming.

It seems to me, that moment was pretty important – and worth preserving.