Using The Emotional Thesaurus in a Classroom 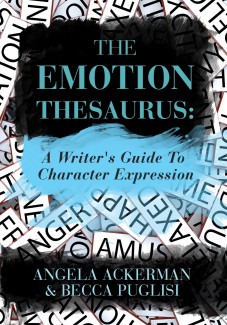 Teaching is sometimes like that game where you throw Velcro balls at a Velcro target. Sometimes the ball sticks, and sometimes it doesn’t.  Teaching anythingin the last week of the school year is dicey, and so when I decided to bring The Emotion Thesaurus by AngelaAckerman and Becca Puglisi on the fourth-to-the-last day of school and share it with my writing class, I wasn’t expecting much.
However, my fifth grade students thought it was a really neat idea, and they loved hearing me list the physical descriptions that went with certain emotions.  I made the thesaurus accessible and asked them to write a confrontational scene between two characters.  They were to include dialogue and physical description.
Some of the Velcro balls fell to the ground.  One student produced something that made me think he must have been in the bathroom when I gave the instructions.  Others made a half-hearted attempt and wrote a scene that used one description taken from the thesaurus. (This is called humoring the teacher and waiting for the clock to run out.)
But here’s a Velcro ball that not only stuck – it landed dead center in the bull’s eye.  This scene was written by Andy, a fifth grade boy, using The Emotion Thesaurus – and Andy did something pretty rare: He made me feel proud on the fourth-to-the-last day of school.
“Snap!” goes Will’s knuckles.
Man, are my muscles tightening.  Now he looks like he’s going to punch me.  I say, “What did I do to you?”
Will says, “You lied to me about something really important.”
Now I’m sweating like crazy and shaking. He is balling up his hand into a fist, ready to punch me.  Trembling, I say, “What are you going to do to me?”
With strength in his voice, he says, “You don’t want to know what I’m going to do to you.”  I flinch when he cracks his neck.  Now I’m looking for an escape.  Will says, “There is no escape for you.”
Now I’m blinking like a mad man who has just lost. I plead, “Please have mercy on me, Will.”
Will angrily says, “Why did you lie to me?”
I say weakly, “Because if you knew the truth, you would have got yourself killed.”
OMG – right?  Not only did Andy know how to use the thesaurus, he knew how to leave his readers hanging!
I can’t wait to use The Emotion Thesaurus next year, starting from the beginning of the year when the kids are fresh.  And I’m definitely hanging onto Andy’s scene as an example!
Do you have YOUR copy of The Emotion Thesaurus?