The Teacher Gets Tested and POISON 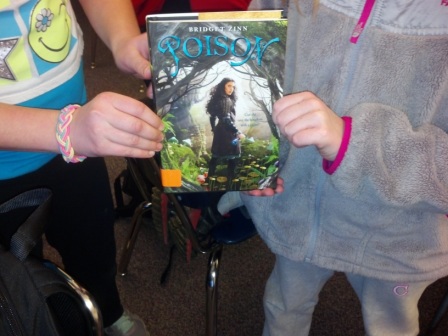 Last week, I read about POISON by Bridget Zinn, on Lydia Kang’s blog. And I promptly bought it – not just because I was touched by the story of how Hyperion managed to get this book to publication after the author’s untimely death and how the writing community has stepped up to promote it on Bridget’s behalf, but because it truly looked like a story my students would enjoy.  “Princesses, poisoners, perfumers, and pigs.” What’s not to like?
I was right, as it turns out. POISON is already in demand among my students, with more than one reader lining up for it.
In other events last week, I was required to take a test to see if I’m qualified to administer the same standardized test I’ve been giving for the last dozen years. (More than a dozen, actually. I’ve lost count.) The state of Pennsylvania has produced an online tutorial on Test Security, and I was required to pass the tutorial before giving the Reading and Math PSSA tests next month.
(I know what you’re thinking, and no … If teachers fail the test, they don’t get to go have coffee in the teacher’s lounge during the PSSAs. They have to re-take the tutorial on their own time.)
I won’t even discuss how ridiculous it is that testing elementary students has practically become a matter of Homeland Security. But as a taxpayer in a state that has already slashed the education budget to the bone, I wonder how much money it took to produce this tutorial. I am especially angry because the tutorial didn’t contain any information not already printed in the Teacher’s Test Manual. I suppose the assumption is teachers can’t read? Or that we’re too dumb to absorb the information unless it’s presented in a visual and auditory format?
Anyway, I passed. Phew.
I don’t teach to the PSSA, although I do have to teach students how to take it. Testing the teacher on the administration of the test seems like going over the top to me. Supposedly, the testing frenzy of No Child Left Behind is on its way out, but I have yet to see any indication of that. As far as I can tell, Obama has been just as bad as Bush when it comes to education.