Your Choice: Light or Dark 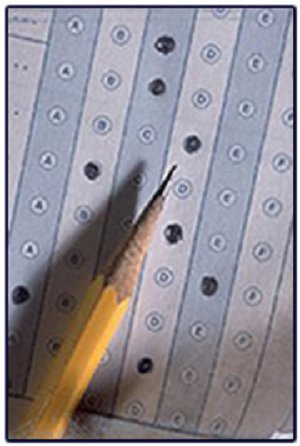 Today I give you a choice of blog posts.  If you want something light-hearted and humorous, check out the guest post on first drafts I wrote for my agent, Sara Crowe, last week.
If you’d rather have the Dark Post, continue reading here for my yearly diatribe on government-mandated standardized testing.
The 2012 PSSA tests were rolled out this year with a whole new set of security measures designed to make sure teachers don’t cheat.  That’s right – they’re not worried about students cheating. They’re worried about teachers cheating. Because increasingly, teachers’ jobs depend on students passing this test.
Every item in my classroom that could possibly influence a test question had to be covered.  Yes, I had to take down the poster defining similes and metaphors – that only makes sense.  But I also had to cover the alphabet. And the calendar. And the weekly agenda that lists the days of the week.  We didn’t have to cover the clock, but I’m sure that oversight will be addressed in 2013.
There was a big change in proctoring instructions this year: Teachers are no longer allowed to inform a student if he or she forgets to complete a section of the test.  This is a bigger problem than you might think. The PSSA consists of two different books – a test booklet and an answer booklet – and students switch between multiple-choice and open-ended questions located in two different places. For years, schools have complained to the state that the directions we read aloud to the students are confusing and often result in students missing some of the open-ended responses.  The state hasn’t changed the wording of their directions by a single word, as near as I can see, but they have instituted the new rule forbidding me to point out a blank section to a student.
A cynical person might wonder if the state wanted students (and teachers) to fail the test.
More and more, this test assesses not what students know so much as whether they can follow directions.  (Again, insert cynicism here about what kind of citizens the government wants to create.)
Three students raised their hands during the math test on the first day to ask me the same question:  “It says for me to explain my answer. Am I supposed to give the answer, too?”  An adult might think that’s a silly question – how can you explain the answer if you haven’t identified it?  But this is a serious question from a fifth grade student who is trying very hard to follow the directions.  And as I said, THREE kids asked me the same thing.
Thanks to test security measures, I was unable to tell them what to do.  “I’m sorry,” I said each time. “I can’t help you.”
I’m only your teacher, after all. I’m not supposed to help you …