Was There a Historical Arthur?

Last week, I shared my explorations in Wales, where I visited sites linked by folklore with King Arthur. I also read a book that took each piece of “historical” proof for Arthur’s existence and subjected it to the standards of a court of law, asking: Is the witness (or writer) reliable? Is the witness refuted or discredited by other witnesses? And never mind King Arthur, can the existence of the witness be proved?
Geoffrey of Monmouth, a 12th century cleric, wrote about Arthur in his histories of Britain. His stories include a lot of magical episodes that are obviously fantasy, but could Arthur still be a historical figure? Geoffrey claimed he’d been given a nameless, lost book that chronicled the stories of Arthur, King of the Britons, but the existence of such a book cannot be proved.
Prior to Geoffrey, there are very few written records about Arthur. Two historians, Gildas and Bede, living in the 6th and 7thcenturies respectively, make no mention of Arthur at all. They do mention other kings and warlords who defended Briton against the Anglo-Saxons, including Aurelius Ambrosius, Riothamus, Tewdric, and Vortigern. The existence of these men is (mostly) proven. I say mostly because some historians believe that Riothamus was not a man, but a title given to Aurelius Ambrosius. Parts of these four men’s lives resemble some parts of Arthur’s life. Could Arthur be based on one of them – or all of them? This cannot be proven, and furthermore, if Arthur is based on one of these men, then there was no Arthur.
There is a backwards reference to Arthur in Y Gododdin, a medieval Welsh poem: “ … although he was no Arthur.” Unfortunately, the dating of the poem is disputed. It might be from the 6th century, which would make it the earliest mention of Arthur, but it might be from the 9thcentury, or even as late as the 12th.  Without a provable publication date, it makes poor evidence for the existence of a 5th/6th century Arthur.
A history written by the Welsh monk Nennius mentions Arthur and lists 12 battles he fought in. However, the names of the battles cannot be matched with any real geographic locations. Nennius is believed to have lived in the 9th or 10th century, but no historian agrees on when or even where he lived. If he can’t be pinpointed in place and time, his account is suspect. To further muddy the waters, some experts believe Nennius’s work was altered in the 12th century.
There are a few other works that briefly mention Arthur, all written in the 10th century or later, each one carefully examined in Wake’s book. One of the recurring problems in these references is that the place names of Arthur’s deeds cannot be matched with real locations and most of the battles cannot be verified to have happened, let alone pinpointed geographically.
King Arthur was clearly a British hero to the 12thcentury Normans who read Geoffrey’s work. Other writers picked up this fascinating character and embellished his legend, adding the Sword in the Stone, the Holy Grail, Lancelot and Guinevere, and more. However, anything written in the 12th century or later appears to be based on Geoffrey’s account, and in all the earlier references, the date, the author, or the authenticity is disputed. As a rather pointy nail in the coffin, two notable historians writing in the period contemporary with or closely following Arthur never mentioned him at all. 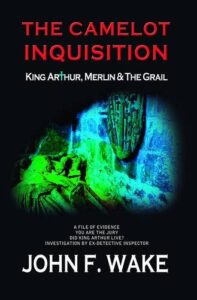 As for physical evidence, there is none. A so-called “Arthur Stone” discovered at Tintagel in 1998 is actually inscribed with the name “Artognou” A connection with Arthur cannot be proved based on the three beginning letters in the name, and besides, many scholars claim the stone is a hoax.
As John F. Wake writes in The Camelot Inquisition: “The feeling of wanting to prove the existence of Arthur is a strong one. Many authors believe in an Arthur. Many millions of people want to believe in an Arthur… [It] seems that from one vague mention [which] can be challenged on numerous points, we have a story that grows with every century that passes. From the moment Geoffrey took on Arthur’s story, he became a cult hero.”
It made me sad to conclude that Arthur was probably fictional. However, it also gives me the freedom to use the legend however I like in my books, without fear of contradicting history.

Hey, I can be as creative as Geoffrey of Monmouth, if I wish.