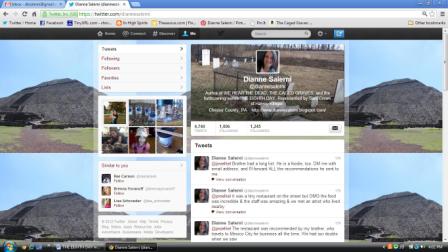 Last week, I went through my Twitter list and weeded out about 250 accounts. This took FOREVER, and if anybody knows a way to do it without looking at each and every account, please clue me in!
I had already noticed an increasing number of people who follow me to get me to follow back, then promptly unfollow me. File that under skanky self-promotion! I also cleared out a lot of inactive accounts and people who only ever tweet their contest entries. (ie: I just entered to win …)
Almost immediately, I saw an improvement in my Twitter feed. Less BUY MY BOOK bleats and a lot more conversation. On Saturday night, a tweet about Anne of Cleves prompted me to reply to someone I didn’t really know. After a few tweets, I learned that she writes about Mayans for MG readers and is going to Mexico City next month and visiting Teotihuacan. I was just there in August! I sent her the list of recommended restaurants my brother had given me (He works for the FCC and spends a lot of time in Mexico City.), and then we found out she is using the same tour company I used! Awesome coincidence, huh?
Anyway, Twitter is a lot more fun with less advertisement. Yes, we all want to promote our books there sometimes, but I’m going to get more finicky about who I follow. I’m there for the twitversation – not the ads.