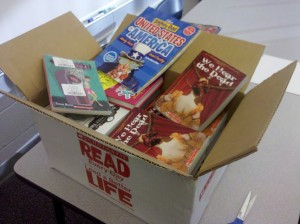 Can you believe that 2010 is almost over? I can remember being a kid and thinking the year 2000 seemed so far away and magical. And now, that landmark date has come and gone – a decade ago! How can that be possible?

The year of 2010 was a fairly awesome one for me. I started blogging in January, not sure if I’d be able to think of something to say a couple times a week! Now, I have so many friends I met through blogging, I can hardly believe it’s only been a year. In January, I also stumbled across the caged graves of Catawissa, and I spent a good chunk of the year weaving them into a YA mystery novel.

In March, I attended the Sourcebooks Fire Launch Party in NYC, where I met some of the fantastic authors I’d already encountered through the TeenFire site: Laura and Lisa Roecker, Joy Preble, Adele Griffin, Lisa Brown, Helen Ellis, Cameron Stracher, Ty Drago, Bekka Black, and more. I also met my wonderful editor Kelly Barrales-Saylor in person, as well as my publicist Paul Samuelson — and had a blast to boot!

May brought the release of We Hear the Dead, a blog tour, and several book events, including a joint event with the authors of Picture the Dead. I enjoyed a summer exploring the blogosphere and working on both a screenplay and a new manuscript (as well as revising an old one)—not to mention a fantastic vacation in Florida with the family.

This fall, my new 5th grade class and I opened a box from Scholastic that was full of copies of my book. That precipitated a lot of jumping up and down and shrieking, and not just from the kids! Then, over Thanksgiving, I dressed up in corset and neo-Victorian/steampunk attire to read from We Hear the Dead at Dorian’s Parlor, hob-nob with Elisha Kent Kane fans, and develop a fascinating new interest!

Think it couldn’t get better? Well, it did. Just a couple weeks before Christmas, I had an offer of representation from Sara Crowe of Harvey Klinger Literary Inc. That’s what I call a Christmas present! Yes, I broke out the champagne! (Actually, it was Prosecco, which I like better.) Now, I can’t wait to start working with Sara in the new year, whipping my manuscript A Pinpoint of Truth into shape and … uh, probably changing its name. (To my blogging buddies who’ve read this one – any ideas for a new title are very welcome!)

As we close out this year, I’d like to extend my thanks to all the new friends I’ve made through this blog this year. Do you know, I sometimes tell you guys things before I tell my offline friends and family? (I know I emailed blog friends about my exciting agent news before I picked up the phone to call my mom …) Thanks for being there!