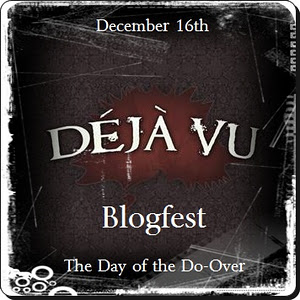 While I was promoting WE HEAR THE DEAD in the early months of 2010, I had a startling revelation about the role played by séances in the 19th century. Too bad I only had 5 blog followers at the time …

Thanks to the Déjà Vu Blogfest – The Day of the Do-Over – I get to share it again!

While working on a guest post for my blog tour, trying to explain why abolitionists and suffragettes endorsed the Fox sisters’ séances, it suddenly hit me: Seances were the 19th century’s version of Twitter!

Picture it — People receiving brief, cryptic messages sent by faceless entities from a far away place. That pretty much describes both a séance and Twitter, doesn’t it?

While I was writing the Fox sisters’ story in WE HEAR THE DEAD, I struggled to find an explanation for why intelligent and educated people like Elizabeth Cady Stanton, Lucretia Mott, and Frederick Douglass supported something that was just a clever hoax. Were they really taken in? Eventually I came to the conclusion that – just like today – people endorse things that benefit them.

People were quick to believe messages sent from Heaven, but, of course, as with Twitter, one can never be really certain of the sender’s true identity. 19th century Senator John Calhoun was a staunch (even rabid) advocate of slavery. Yet, after his death, Calhoun’s spirit (@johncalhoun if you please) visited the Fox sisters’ séances, claiming he’d been enlightened by the Truth in the afterlife and recanting his former position!

Stanton, Mott, Douglass, and other reformers knew exactly what they were doing when they endorsed the Fox sisters. They had a message they wanted to spread, and the Fox sisters, abolitionists and fledgling feminists themselves, were more than happy to cooperate. As @benjaminfranklin said in one of their séances, “Great changes are on the horizon!”