7 Things to Do When You’re STUCK 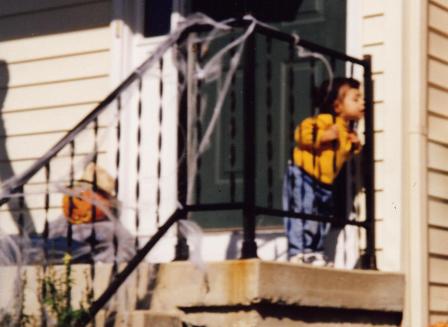 If it’s crossing your mind that I’m writing this post because I’m stuck … then, you’re right. Or at least, it feels like I’m stuck because the answers aren’t coming to me as fast as I’d like.

And yes, that IS my daughter in the picture (16 years ago). And yes, I did extricate her –AFTER I took the picture.

When you are stuck – on a first draft, during revisions, or even in the planning stages – here are 7 things you can do that have helped me get unstuck:

1. Open up Twitter and/or Facebook and stare at the feed. Refresh lots of times. This is not procrastination. It’s surfing for ideas. Sometimes the most random comments, links, or videos suggest something to you. One night a couple years ago, someone posted a video of a flooded stream busting across a two-lane road, breaking the road into chunks that are swept away in the flood — in less than a minute. You’ll be reading a scene just like that in The Morrigan’s Curse.

2. Write a long email to one of your critique partner explaining the dilemma – what you need to do but can’t do and why you can’t do it this way and why it won’t work that way. Then delete the email when your lengthy explanation of the problem produces its own answer. Be sure and send thanks to your CP, because without him/her, you wouldn’t have written the email.

4. Lie on a pool float staring at the sky and let the randomness of your journey around the pool jar ideas loose from your mind. A hammock or a swing also might work, although it’s not quite as random a movement and doesn’t have the same effect (for me).

5. Ask a CP who’s read your manuscript to write questions for the character most responsible for your state of stuck-ness. Answer the questions from that character’s POV and find out what’s going on in his head. Yes, you could write the questions yourself, but you’re stuck, so how will that help? The point is to get an outside person’s perspective on your plot, your character, and your problem.

6. Seriously consider that you’ve made a mistake – not at this point in the manuscript, but earlier. Back up to the last point where you were really sure about the plot and look at where you went from there. Did you take the wrong path? Present things in the wrong order? Have your character behave in a way that doesn’t make sense? Your DELETE key may be your solution.

7. Go read a book in a different genre and audience from the one you’re writing. If you’re struggling with a MG contemporary fantasy, go read about an adult book about an assassin in a steam-powered society on an alien world – or zombies on the Titanic. If the book holds your attention (in spite of your preoccupation with your own stuck-ness), figure out WHY, then figure out how you can do something similar in your own genre and for your audience.

And please don’t judge me for taking that picture. It was the third or fourth time she had inserted her head through those bars and gotten it stuck there. Really, was she expecting a different outcome this time?