Revision: Alternate Universes for Your Characters

If you’re a writer, then you know how real your characters can be. You dream about them, talk to them, maybe even argue with them. They take on a life of their own once you put them on the page, and sometimes they lead you in directions you didn’t expect. I’m not much of an outliner, but even when I do outline, I have a tendency to deviate. Or, perhaps it’s my characters who deviate.

But then comes revision, and with a sweep of the highlighting function and a jab at the delete button, you start to re-write your characters’ lives. I usually fall in love with half my characters, so I welcome revision as a way to spend more time with them. (I’m one of the few writers I know who mourns when completing a first draft, instead of celebrating.)

If I go back into my initial notes for the story, I find yet another universe, where Verity’s rival love interests, Nate and Hadley, were completely different people and she made a different choice in the end. That was an aborted universe that never really came to be, and I can even trace the way it became diverted.

I’d read a blog entry by Lisa Brown and Adele Griffin, about how they searched The Library of Congress for historic photographs to match their characters and provide a basis for the illustrations in Picture the Dead. I thought it was a fabulous idea. Even though I wasn’t going to draw my characters, I wanted to be able to picture them in my mind. I looked for photographs to match the characters in my outline – but, of course, there were no such pictures. Instead, I found these two: 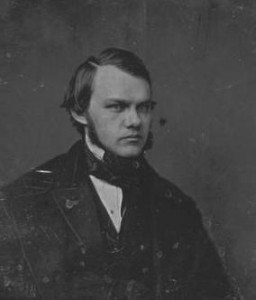 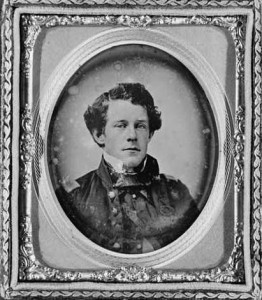 Neither of these young men resembled the characters I planned. But these photographs called to me, and these images shaped my two heroes. They went down on the page with their own personalities, and from that point there was no going back to the planned story.

If I’d picked two other photographs, would I have a different story today? Probably.

What about you? Do your characters inhabit multiple universes as you revise and re-work your manuscripts?

Photographs from Library of Congress