Last week I talked about suspension of disbelief – the reader’s willingness to enjoy a fictional story as if the events are really occurring. This month I’m going to focus on speculative fiction. How do you introduce your reader to the fantastic elements in your book while making them believable and a seamless part of your story?

You’ll want to immerse your reader in your setting as soon as you can – whether it’s an alien planet, a magical kingdom, or an alternate reality where ghosts are known to be real and everyone has one in their house. But I don’t think the way to do this is by pushing readers into the deep end of the pool without any warning! A first chapter filled with author-invented words, unpronounceable names, and characters doing inexplicable things is not going to draw a reader in. It’s more likely to slam down the barrier of disbelief and cause them to close the book.

It’s better to let readers walk into the pool, experiencing a gradually increasing immersion. Therefore, no matter what kind of world your story takes place in, make sure there’s something readers can relate to in the opening chapters. Readers might say, “Well this is a strange place. But I see that the MC is nervous about an upcoming challenge … jealous of his brother … learning a new skill from her father, etc.” There needs to be something recognizable about the situation so the reader can make a connection with your protagonist and take a few steps more into your world. 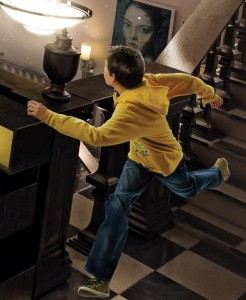 If your story starts out in our world, then takes an unexpected turn into the supernatural, the best way to encourage suspension of disbelief is by showing your reader what normal means before throwing in the abnormal. MG and YA writers are often encouraged to rush right to the inciting incident, but I don’t think this means dumping Godzilla on the first page. For instance, if a boy moves into a new house and it turns out to be haunted, I don’t think the ghost should appear on the first page. (Unless, as stated above, meeting ghosts in your house IS normal in the world of your story.)

Instead of having that ghost pop up too soon, use the early pages to set the mood. Have something strange happen, use foreshadowing, and bring in the ghost when the reader has already suspended disbelief and is expecting its arrival.

Finally, make sure your characters behave/react in ways that make sense, given the situation. In The Eighth Day, when Jax first experiences the secret day of the week, he panics, thinks it’s the zombie apocalypse (based on what he’s seen on TV) and breaks into a Walmart to steal survival supplies. He doesn’t think it’s “cool” or “neat” and go off to explore until the second time it happens, when he has reason to believe everything will be back to normal the next day. Likewise, at the end of the book when the world is at stake and a real 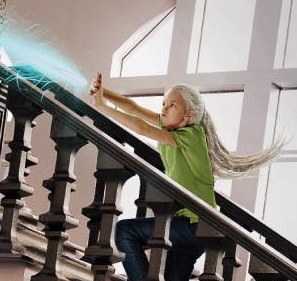 apocalypse might be happening, Jax doesn’t suddenly develop fighting skills he never had before. His actions in the climactic scene are limited to what a 13-year-old boy might be able to do and skills Jax has already demonstrated.

Suspension of disbelief in speculative fiction for kids is a lot like coaxing a toddler into a new situation: Do it gradually. Appeal to the familiar. Establish normality before introducing the startling and strange. And always keep in mind how a real kid (living vicariously through your character) would react and behave.