This is How Traditions Start … 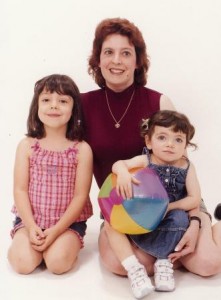 Several years ago (eight, to be precise), I decided to get creative with the note I sent out in Christmas cards and I wrote a creative little drama, which got inserted into everybody’s holiday greeting. It was well received by family and friends, and before Thanksgiving of the following year, people were hinting. “You’re going to do it again, right?”

Thus began The Slice of Salerni Life skit, which sees a reprise every year. Last Christmas, I tried to let it die a quiet little death, but the hue and cry over the empty card caused me to write it after the fact and send it out by email.

I thought the original skit was lost forever, due to a computer malfunction, but my mother-in-law recently found a paper copy. Oh, what fun it was to read the first one – and to consider how times have changed …

A Slice of Salerni Life – Christmas 2002

It’s late afternoon in the winter, and Dianne has just picked up Gina from day care. Gabbey’s had a half day of kindergarten, and Dianne’s had a full day of work …

Eight years … wow. What a difference. It’s time for me to get started on A Slice of Salerni Life 2010, and I’m hoping for inspiration soon!