What Do You Think of Google+? 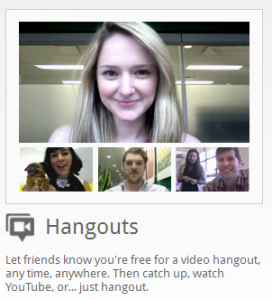 When I first saw Google+ hitting the news and started getting invitations to join, I groaned. Facebook, yes. Twitter, I’m there. But ANOTHER ONE? I didn’t think I could do it. So, I deleted all the invitations and said, “The social networks stop here.”

But then, Tina Laurel Lee suggested a Google+ Hangout for our TPR group. If you’re not familiar with TPR (The Practice Room), check it out here. The brainchild of Tina Laurel Lee, TPR is basically a way to write in the company of other writers, separately but together, in a designated 1-hour session of concentration (no phones, TV’s, or internet allowed) and chat about it afterwards.

Google+ Hangout gives TPR a way to meet (occasionally) in a visual chat for a writing session. Imagine the Brady Bunch heads in their little square boxes, only everybody is busy writing in their boxes – taking a break every 25 minutes to chat, throw out a question, share a breakthrough or a frustration – and then returning to another writing session. People arrive and leave as suits their schedule. One of our Hangouts lasted for 2 hours of writing, with designated “water cooler” breaks to share.

So far, we’ve done this twice, and we’re planning another session for this Friday, August 19 at 2pm EST. (This is a change of date since my original posting — We wanted to avoid conflicting with Write On Con.) If you’re interested in attending, contact me or Heather Kelly (Tina’s on vacation) for an invitation. Since this is my last week of summer vacation (quiet sob), I hope to set up some evening Hangouts once the school year begins, for those of us unable to make the afternoon EST times.

Okay, so I broke down and joined Google+, but the Hangout is the only thing I’ve done with it. Tell me, blogging friends, what else is it good for? I’d love to know what (if anything) you’ve done with it!