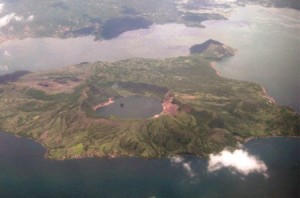 It’s parent-conference week at school, and I’m a little stressed …

So I’m going to cheat a little and revisit a blog post from over a year ago — an explanation for the volcano at the top of my blog. That particular volcano means something to me. It represents a break-through in writing: the discovery that sometimes, in order to tell your story, you have to let your characters discover themselves and show you the way.
People who are familiar with We Hear the Dead may have guessed – that’s Dr. Elisha Kane’s volcano. Not his personal volcano, of course, but the one he explored as a young, impulsive adventurer and the one which almost cost him his life.

On the island of Luzon in the Philippines, there’s a freshwater lake called Taal Lake. The active Taal Volcano lies in the middle of that lake, and inside the volcano is a smaller lake (called Crater Lake) which contains its own tiny island, called Vulcan Point. That’s right: an island in a lake in a volcano in a lake on an island. Have you got it?

In 1844, while traveling in the Philippines, the impetuous young Kane descended by a vine rope into the gaping maw of Taal Volcano to investigate the chemical composition of the lake within. Once he reached the interior …

No, I’m not going to tell you the whole story. Elisha Kane tells it himself in We Hear the Dead, but I will let you know this much: Readers have told me that this is the point in the story when they fell a little in love with the dashing explorer. The same goes for my heroine Maggie Fox … and probably for me, too.

More importantly, this was also the point in my writing where the character of Elisha Kane developed his voice and his personality. Up to that point, I’d had trouble wrapping my head around this man. He was my romantic lead, but the real Kane had some traits that were going to be hard to portray sympathetically. Not to worry – Elisha burst onto stage, fixed his sights on Maggie Fox, and firmly took control of the story, steering it in a direction I never intended to go.

He was a strong-willed young man in real life. His fictional version ended up no different. I wasn’t able to complete the writing of this novel until I let Kane take me where he wanted to go.

Where are your characters taking you?