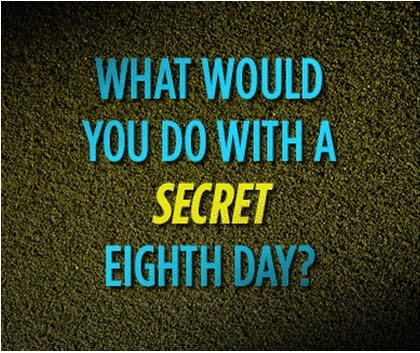 A couple weeks ago, J.E. Oneil at Still Writing tagged me for the Writing Process Blog Hop.
1) What am I working on?
I’m currently putting the finishing touches on the 4thdraft of the third book in the Eighth Day series so I can send it to my editor later this month. It won’t be the final draft, of course. I expect to go through at least 3 more drafts with my editor.
I’m also doing preliminary research and brainstorming for a new project I hope to start this summer. I don’t want to give away the premise at this point, but let’s just say it will be another MG adventure, with science instead of magic at its heart. Okay, one more hint: String theory for kids!

2) How does my work differ from others of its genre?
I know the editor who acquired the Eighth Day series researched the “secret day of the week” idea before she offered for my work. She told me later that she didn’t find much on that topic, although Scott Westerfield wrote a series called The Midnighters in which there is a secret hour. (I had never heard of it until she mentioned it, and I don’t plan on reading it until I am finished the Eighth Day series.)
School Library Journal said that The Eighth Day “melds Arthurian legend into present day in much the same way that Rick Riordan uses Greek and Egyptian mythology, with characters being descendants of heroes long thought to be folklore.”
Some readers have commented on the uniqueness of my weaving YA characters so prominently into an MG story. (See the post below.)
As for the Shiny New Idea, I hold my breath every time I scan the Rights Report in PW Children’s Bookshelf, hoping I don’t see anything similar to my new project.
3) Why do I write what I do?
I write the kinds of books I like to read, whether that be historical, mystery, fantasy, science fiction, or adventure.
4) How does your writing process usually work?
First comes the premise, followed by the characters, and then a few basic plot points that create a sketchy dot-to-dot outline of the story.
Then comes the torturous first draft, in which I lose my way, doubt my sanity, complain, tear my hair out, and whine a lot on this blog.
Around the time I type THE END on the first draft, I realize what the whole story was supposed to be about in the first place, and I dive immediately into a series of successive drafts, revising until I have the real story polished enough to share with my agent.
Then I hold my breath, waiting to hear what she thinks.
Thanks, J.E., for inviting me to participate. I’m supposed to tag other writers, but I’m pretty shy about doing that, and most people I know are caught up in alphabetical blogging. So, I’m going to cheat and tag Christine Danek, because I know she’s already participating in this hop on April 11!