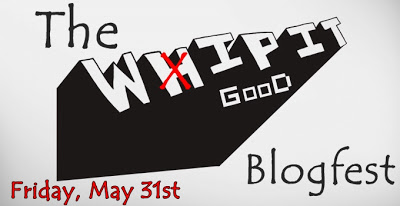 Raise your hands if you know the song Whip It! by Devo.

Okay, raise your hands if you sang along to it when it was first released. Huh. Who wants to admit that? Yeah, my hand is still raised, sorry to say.

D.L. Hammons and Elise Fallson are hosting the WHIP IT GOOD BLOGFEST, in which participants share details about their current WIP. I was a little hesitant to sign up, since my current project is pretty far along, but D.L. encouraged me to join in and share the details, so here goes …

WIP Title: The manuscript originally started with the title GRUNSDAY, but was renamed THE EIGHTH DAY by HarperCollins with my full support. I got to keep the term Grunsday within the story, but the new title is more dramatic, as befits a fantasy series.

Word Count: With some embarrassment, I can share that the word count of the first draft was 99k. Yikes! The word count of the current version is 62k. Yes, that IS a lot of cutting. I put on my Grim Reaper robe for that word-slashing.  Although … you know what’s funny? In my editorial revisions, I had to put back a lot of stuff that I had previously cut and take out other things. Apparently my sense of what to delete and what to keep is a little off!

How Long Have You Been Working On It: The original story idea has been bothering me for a couple years. I started the first draft in April of 2012 and a had a draft to share with my agent by September. I did a round of revisions with my agent (which involved changing the audience from YA to MG), and the manuscript sold in October of 2013 to HarperCollins in a 3 book deal. I am currently awaiting the a third round of editorial notes before the book goes into copy-editing. The second book in the series already exists in draft form, but changes will have to be made so it aligns with the revised version of Book 1.

Elevator Pitch: A boy discovers an extra 24 hours between Wednesday and Thursday and a mysterious girl hiding in the house next door who exists only on that secret day.

Synopsis: When seventh grader Jax Aubrey wakes up to a world empty of people, he does what anyone would do: assumes it’s the apocalypse, ransacks the local Walmart, and fortifies his guardian’s house against zombies. When he wakes up the next morning to a normal Thursday, Jax wonders if he’s lost his mind.  But his 18 year-old guardian, Riley Pendare, also experiences Grunsday, an extra day squeezed between Wednesday and Thursday.  Jax learns that some people exist only on Grunsday, including the girl who’s been hiding in the house next door for the last 35 years — her life skipping over seven days at a time like a stone skimming across a pond.

A mysterious girl who knows nothing of the regular world? Jax can’t think of a better way to spend his extra 24 hours than trying to befriend her.  But Evangeline is the key to a 2000 year-old spell with its roots in Arthurian legend. Jax’s guardian is her reluctant jailor, sworn to keep her out of the hands of those who would use her – and kill her if he can’t. When Jax accidentally leads a pack of human bloodhounds to their door, it comes to a terrible choice: face a real apocalypse or sacrifice Evangeline.
Are You Looking for a CP or Beta Reader: No, not for this project. But I love, love, LOVE giving feedback to others. See the sidebar for information about First Impressions, which I do every month — or come back next week to see it in action. And I’m also offering a 10 page manuscript critique as part of Project Middle Grade Mayhem’s 700 Follower Celebration.