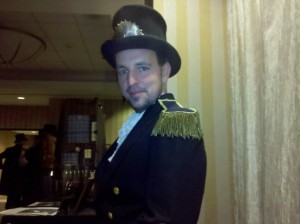 Shortly after arriving at Dorian’s Parlor on Saturday night, we had the chance to chat with one of the founders, Gil Cnaan, who described the event as catering to “anachronauts – people who travel between times that never existed.” That pretty well sums up what we saw there, as we chatted with people dressed in everything from medieval capes and jerkins, to tails and waistcoats, corsets and fishnet stocking, wings, silver contact lenses, and sometimes fangs. 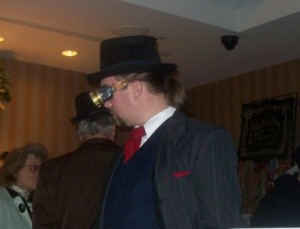 Everybody was fascinating. This was a highly intelligent crowd, with interests in history, science, music, art, literature, and clothing. Vendors displayed artwork, jewelry, steampunk accessories, hats, corsets, and even some replica 19th century surgical equipment: “For when it absolutely, positively HAS to come off in the next 30 seconds!”

The organizers kindly allowed my daughters to sit at my booth, outside the main ballroom. I worried that some of the attendees might be unhappy with their presence, but everybody took it in stride. “I approve of your minions!” said one gentleman, eyeing them up through his steampunk eyegear. And one of the vendors offered Gabbey a discount on a hairpiece she liked, just because she was wearing a Zelda hat. 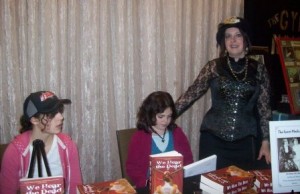 One of the highlights of the evening for me was when I met Kyle Cassidy and Trillian Stars, who brought their copy of High Spirits, the original version of We Hear the Dead. Turns out Kyle is an aficionado of Elisha Kent Kane, and we had a grand time dishing about Elisha and Maggie, bashing Elisha’s mother, and speculating on whether he would have ultimately manned-up and done the right thing if you-know-what hadn’t happened.

I was so busy talking to people, I didn’t get to see much of the show, but there was a fan dancer, an opera singer, Katie Kat, a showing of the animated short The Tesla Experiment, and performances by Ego Likeness. Oh yeah, I was part of the entertainment, too. They showed my book trailer, and I did a brief reading. 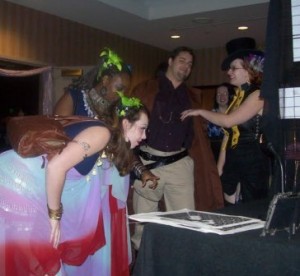 A gentleman came up to me towards the end of the evening to get a book from me. He said he was sorry he’d missed my reading, since he got in late at the airport. But he’d caught it on the webcast. I just blinked at him. “What webcast?” Turns out, the whole event was broadcast live on the Dorian’s website. I’m really glad I didn’t know that at the time! 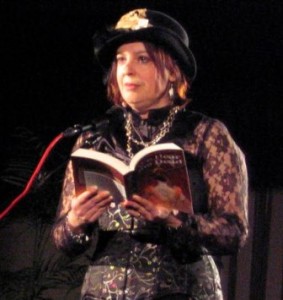 Overall, this was a blast, and I really want to go again! I was eyeing up the costumes, getting some ideas, and I know my husband was, too. I think I might be an anachronaut at heart, too! 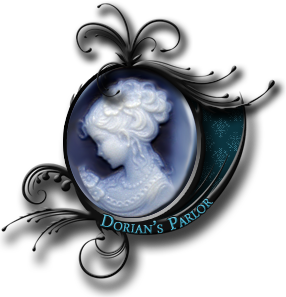 Saturday, November 27 at the Doubletree Hotel in Center City, Philadelphia, I’ll be reading from We Hear the Dead and leading a Q/A session at a “Dress-to-the-Nines, Steampunk, Neo-Victorian, Black-Tie” evening – in full 19th century costume!

How did I end up here?

Well, it starts like this: A man and his wife go into a corset shop …

Yeah, I know it sounds like a dirty joke, but it’s true. My husband took me to Philadelphia for a surprise shopping trip last month, on the hunt for a nineteenth century-type costume. The wonderful staff at Passional were not only able to help us put together an outfit, they suggested we check out Dorian’s Parlor, a monthly steampunk extravaganza held just down the street. Passional apparently outfits a number of steampunk enthusiasts and has a regular vendor table at the event. Even though We Hear the Dead is not steampunk, they seemed confident the subject matter would be of interest to the Dorian crowd.

(Of course, the romantic lead of WHTD, intrepid Arctic explorer Dr. Elisha Kent Kane, was a Philadelphia native and rests eternally within the city limits. See my blog post about visiting his tomb here.)

My promotional staff (ie: Bob) contacted Gil Cnaan, one of the organizers of Dorian’s Parlor, and before I knew it, the two of them had booked me on stage – in corset – to do a formal reading. I am psyched! When I learned that the evening’s entertainment will also include a showing of the animated short film The Tesla Experiment: Twain in Vain, I knew it had to be another SIGN!

Dorian’s Parlor was recently named the Ultimate Geeky Getaway by Geekadelphia. Well, with my lovely new outfit, at least I’ll be dressed in appropriate Geek Chic … Pictures to come, I promise!

PAYA: Bringing More YA to PA

Just a short blog post today, folks! My sister and her family are visiting from Kansas, and we are having a blast! So far we’ve hot-tubbed and visited a winery and then hot-tubbed some more. The kids played in the pool, which, at 91, is only ten degrees off from the hot tub. I made my famous sausage risotto, and my daughters are introducing their cousins to the raptures of ZELDA.

But looking ahead towards August … PAYA!! (No, not papaya. Stop looking at that fruit! PAYA — YA in PA!)

If you live anywhere in the greater Philadelphia area and have an interest in reading or writing YA, mark your calendars for Saturday, August 21 and the First Annual PAYA Festival, taking place in West Chester, Pennsylvania at the Center for Performing and Fine Arts.

PAYA is a coalition of Pennsylvania’s young adult authors, bloggers, librarians, readers, and other book-lovers. Our mission is two-fold:

1. To share the love we have for young adult literature with others in our state
2. To raise money to support Pennsylvania’s libraries, with a focus on helping build Young Adult library collections and Young Adult services.

There will also be two writing workshops! One is for teen writers aged 13-18 and will be led by teen authors Chelsea Swiggett and Kieryn Nicolas. The workshop will run from 1-2pm and costs $10.

The other is a listen and critique workshop, in which YA authors will meet in small groups with attendees, who should bring three pages of a WIP to share. This workshop will run from 10am-noon and costs $40.

Find out more at the PAYA website, where you will soon be able to register for the workshops.

I can’t wait! Dread Daughter #1 already has her eye on that Teen Writer workshop, and I’m hoping to get some signed books from awesome authors to offer up at my 100 Follower Celebration – whenever that happens. (Not quite there, yet …)

I realize that I was supposed to post the second half of my reading/testing essay today, but I was diverted by a statement on the news last night. “A few more inches,” said John Bolaris, the Philly weather guy, with a smarmy grin, “and we will top the all-time record in the Philadelphia area!”

The all-time record? That’s a bit lofty, isn’t it? How long have we been keeping records anyway? Maybe a hundred and fifty years? If you want to take a look at a bad winter, take a gander at Leutze’s famous painting of Washington Crossing the Delaware.

This painting has been criticized for some historical inaccuracies – for example, it’s the wrong type of boat and that flag was not in use. The ice floes in the Delaware River have sometimes been cited as one of the mistakes, but historical accounts suggest that it may have looked just like this.

“The Little Ice Age” is a term used to describe a period between approximately 1300 and 1850 in which bizarre climactic shifts wreaked havoc in North America and Europe. It was not a true ice age, but a cycle of strange weather that included intensely cold winters, numerous Atlantic storms, and intense summer heat. The weather in 1812 was so severe it stopped Napoleon Bonaparte’s invasion of Russia, reducing an army of 600,000 to 130,000. And yes, Washington’s army crossed an ice laden Delaware River to attack Trenton on December 25, 1776. (Philly residents: Have you ever seen the Delaware River choked with ice floes on Christmas Day?)

Washington didn’t make out much better the following year either. In 1777, his army was pounded by hurricanes in the fall, and of course the devastating winter of 1777-78 at Valley Forge is well documented. Consider this: They didn’t have snowblowers; they didn’t have plows and salt trucks; heck, most of them didn’t even have shoes. And yet they still got up and went to war against the best trained army in the world to win our freedom.