Can anyone identify this species of fish? 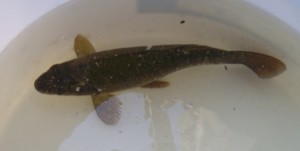 About three years ago, approximately 2 dozen of these fish appeared suddenly in our pond. They were about ½ inch long when we first spotted them, and in the past 3 years, they’ve grown to 7-9 inches. Before anyone asks, our pond is a closed system with an upper pond … 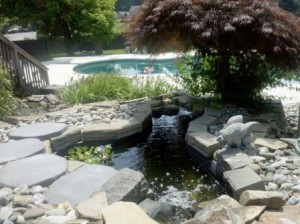 … and a lower pond joined by a pump. 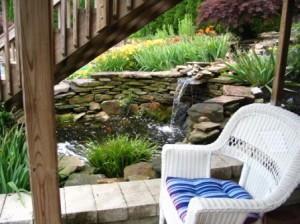 These fish look nothing like any other fish we have, so they weren’t babies of our existing fish. It’s as if they just dropped from the sky (or outer space). Now, my friend Kelley Crist did admit to sneaking into our yard when we weren’t home one year and depositing a bucket of frogs in our pond (No, I don’t know why, either. Ask her.), but she adamantly denies delivering these fish.

They are all dark-green to black in color. Some of them have a silver streak along their backs at the base of the top fin. (Military rank?) We wanted to catch one of those to photograph, but they were too quick. Our regular goldfish are dumb enough to be caught by a net again and again, but not these mystery fish and especially the striped ones. (It’s as if their mother ship warned them about this.) 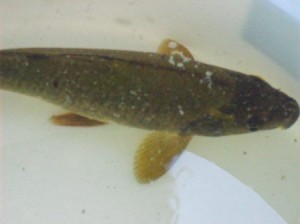 Now, brace yourself for the weirdest part of this story. In the fall of the year they first appeared, we decided to drain the upper pond and clear out the algae. As the water level dropped, we discovered another of these fish – living all by himself, upstream, in the upper pond. He was twice as big as the others (because he was their leader).

One more interesting point: When our pond was robbed of all the largest fish this spring (by a heron, a juvenile delinquent, or the Fish Rapture – don’t know which), these fish all escaped harm. They are all still here.

If anyone can tell me what kind of fish this is – or make up a plausible interesting story about how they got in my pond – I’d love to hear from you!