Totally in Love with Kindle! 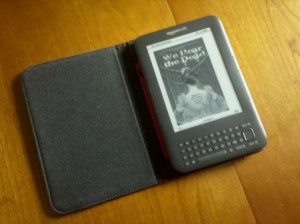 A few months back, I blogged about how I was thinking of getting an ebook reader, but I wasn’t sure I’d find it useful – especially considering how many manuscripts I beta-read these days. Although the idea of having books instantly at my fingertips was appealing, I wasn’t sure I’d use the Kindle much after the novelty wore off.

Well, I got a Kindle for Christmas (thanks, Bob!) and while it’s too early to claim the novelty won’t wear off, I am completely in love with it so far!

Do I miss the feel of a book in my hands? Not really. In fact, I like to take the cover off the Kindle when I read, to keep it as light as possible. I can’t rave enough about the screen, which doesn’t in any way resemble a computer screen.

Uploading manuscripts is easy enough, although depending on how the author formatted the document, paragraph indentations might be off and sometimes italics don’t show up properly. However, the Kindle is so pleasurable to read, I’d still rather use it than the computer. I can make brief notes on the Kindle – which I then have to transfer to the computer, so I can send a marked up document back to the other writer. It’s an extra step – but again, I don’t mind it because the actual reading is so much easier on my eyes.

What do I have on my Kindle so far?

Nine books: Leviathan and Behemoth by Scott Westerfeld, Birthmarked by Caragh O’Brien, A Spy in the House and The Body at the Tower by Y.S. Lee, Huck Finn by Mark Twain, Soulless by Gail Carriger, a Warriors book by Erin Hunter I bought for Gina to read and … ahem … We Hear the Dead. (Well, I had to buy my own, right?)

Five manuscripts: Two of my own, The Caged Graves and Strange Truths (new working title of A Pinpoint of Truth), plus Marcy Hatch’s Grimoire, Lori Walker’s Love Potion, and S. Kyle Davis’s Blackbird.

I brought my Kindle in to school to show my class, but they were less impressed than I thought. Turns out, they’re no strangers to e-readers. I took a quick survey and was surprised to find out that in a class of 24 students:

I’m kind of thinking ebooks are the future of reading.