Kindles (and Nooks) Go to School 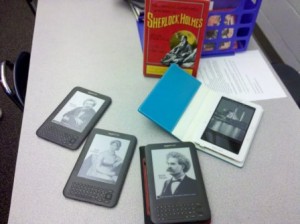 Technically, they’re not supposed to be there.

Of course, neither are cell phones, and we all know half the students have cell phones in their pockets or their backpacks. I insist my daughters bring their phones to school, in fact, just so we can coordinate after school play practice, who is picking up which children, etc.

So nobody ought to be surprised that ebook readers are coming to school, too. A recent New York Times article reports a sharp rise in the number of young ebook owners. Thanks, Al Past, for sending me the link!

It was not so long ago that people were predicting publishers would not bother to produce children’s and teen’s titles in ebook format, because it was assumed children would not own ebook readers. I even recall seeing a comment on a First Five submission at YALitchat which suggested the author should remove mention of the teen MC reading on a Kindle. “Teens don’t have Kindles.” Oh, yes they do – and so do elementary school students.

So far, my own children don’t own one of their own, but they both have scooped up my Kindle when I’m not using it. I ordered a book specifically for Gina, at her request, and Gabbey has been reading Sherlock Holmes stories, which I downloaded for 99 cents because I’m teaching them in class and it was easier than lugging books around. The New York Times article mentions that as well – that kids are reading more classics because they are free or priced very cheaply.

It’s a revolution, of sorts. And a good one, I think.

How about you? Seen any Nooks and Kindles in young hands recently? Would you buy one for your own kids? What role could they/should they have in school?